This is a breaking news update on the previous post.

Calvary Chapel replied to our inquiry this morning regarding its tweet supporting Mayor Jill Swain's reelection this election cycle.

Here is what we received.

"The Twitter post was done unintentionally. It was supposed to be posted to our Pastors account. It was taken down as soon as we realized the error. Simple human error, nothing more. Have a great day."

In answer to a follow-up question we received this from Pastor Mike Burner.

"The post was taken down on Sunday, by me, after our last church service. We (I) did not repost it elsewhere. It was a simple logon mistake of my own doing."

While we will take the church at its word that this was an innocent "mistake", it is worth pointing out that it seems odd the original tweet that came from the church account but also referenced the pastor's account (@mikeburner).  If the tweet was supposed to be coming from the pastor's personal account, also referencing that same account in the tweet seems redundant.

I guess we'll just have to chalk that up to an inefficient use of the 140 character Twitter format.

Also, as of this writing, Mayor Swain still has the content of the original tweet up on her campaign Facebook site.  One would think he appropriate thing for the good Mayor to do would be to pull that down as well. 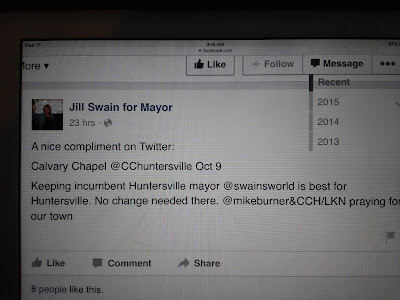