With less than a month until election day, it is now the "silly season" in our local elections - the time when the odd and outrageous tend to happen.

Huntersville Mayor Jill Swain kicked off the season with a swooning response to a questionable endorsement from a local church for her reelection.

The endorsement from Calvary Chapel in Huntersville appeared on the church's Twitter feed on Saturday just after noon.  Saturday evening Swain responded from her @SwainsWorld account. 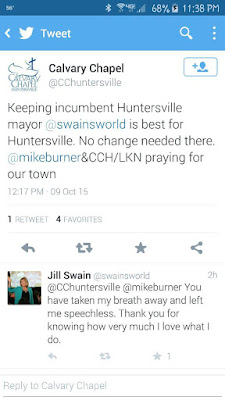 An email to the church office requesting confirmation on who exactly posted  the tweet was not returned on Sunday, and the tweet was still up on the church's site Sunday evening as well as on Jill Swain's Facebook page.  However, the content of the message coming from an official church account and including the church pastor Mike Burner would most certainly seem to cross the line regarding the prohibition on tax exempt organizations engaging in political activity.

Even the most ardent supporters of churches getting involved in politics would likely raise eyebrows at this tweet under current law.

Check out the below excerpt from an open letter to pastors from just this past April.  It is from an organization called the Alliance Defending Freedom for Faith and Justice.  The letter was posted at NCFamily.org.


Churches are recognized as exempt from federal income tax under 501(c)(3) of the Internal Revenue Code so long as they do not “intervene” in political campaigns. Political intervention, essentially, is advocating for or against candidates for political office. This means that the IRS prohibits churches from activities such as:

Second, the candidate prohibition bans a narrow category of political activity. Churches and their pastors can still discuss candidates’ positions on various issues without violating the candidate prohibition. Churches and their pastors can still distribute non-partisan voter guides, urge their congregants to get out and vote, or even rent out their facilities to candidates on the same terms as any other public group. Only advocating for or against a candidate is prohibited.

The fact that it doesn't seem to bother Mayor Jill Swain at all certainly should bother voters.

UPDATE:  See the current post for an update on this story.  The tweet has been removed.
Posted by Rick Short at 11:25 PM