DAVIDSON, N.C – The Town of Davidson has completed the draft of the Davidson Mobility Plan, a community-driven effort to look at innovative solutions, projects, policies, and programs to help residents move in town by foot, wheelchair, bike, car, transit, and address congestion. The plan is also a Comprehensive Transportation Plan (CTP) which evaluates moving people around town and provides actionable items such as project recommendations, projected costs, and funding sources to help the town manage, sustain, and improve the town’s transportation infrastructure.

Members of the community are invited to read the draft and comment by March 15 in the following ways:


“This draft is the culmination of many months of public input,” said Senior Planner Travis Johnson. “We appreciate the work of our community stakeholders and consultant Alta Planning + Design, and look forward to the eventual approval and implementation of this plan.”

The next steps are to discuss this draft at future meetings:

For more information, please visit www.davidsonmobilityplan.com and subscribe to the Davidson Mobility Plan eCrier list at www.townofdavidson.org/eCrier -- simply enter your email address and click on the small grey envelope to the left of “Davidson Mobility Plan.” For more information, please contact Senior Planner Travis Johnson at tjohnson@townofdavidson.org or 704-940-9639.
Posted by Rick Short at 6:37 AM No comments: Links to this post

DAVIDSON, N.C. – The Town of Davidson invites the community to a meeting with Davidson Chief of Police Penny Dunn on Monday, February 25 at 6:30 p.m. at the Ada Jenkins Center (212 Gamble Street) in Room 204 in the classroom building.  This is a “No Agenda” meeting.

“I want to take the time to ask how you think the Police Department is doing,” said Chief Dunn. “What are we doing right? What can we do better?”

The opportunity to engage with Davidson Police staff happens throughout the year at various events, such as Town Day, Custard with a Cop, or National Night Out.  Chief Dunn hopes a meeting without activities or an agenda will allow her to get the feedback needed to improve relations and performance of the organization.  ”We all believe we are doing a good job, but feedback from the community we serve ensures we are continuing to meet needs, get fresh ideas, and stay connected,” said Chief Dunn.

Posted by Rick Short at 6:23 AM No comments: Links to this post

Davidson Commissioners will be asked to approve a budget amendment at Tuesday's Board meeting for $200,000 from the Town affordable housing fund for 153/155 Mock Rd in the Westside neighborhood.  The property will become part of the Davidson Housing Coalition's inventory of homes.

aShortChronicle has no problem using the AH payment in lieu funds for this type of thing.  That's what these funds are collected to do.  However, the amount is eyebrow raising when one considers this property sold in June 2017 for just $138,000.  That's according to the Mecklenburg County Polaris site.  In addition to that the two parcels to be purchased were recently valued at just $154,600 combined as part of the Mecklenburg County revaluation. $147,300 for the house and $7300 for the side yard parcel. $200,000 would be fully 29% above the combined appraised value.

The budget amendment wording does say any unused portion of the $200,000 will be returned to the affordable housing fund - implying the purchase price and related costs may be less than $200,000.  To clarify how Town money is being spent, the Town should disclose the actual purchase price and if any renovations need to be done to the house. 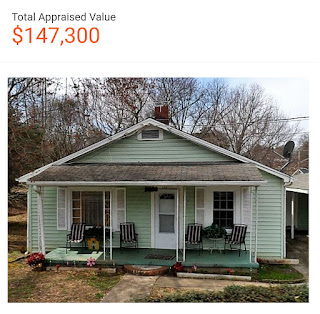 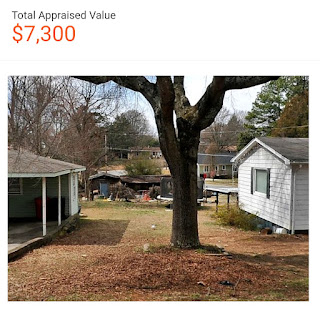 Posted by Rick Short at 6:56 AM No comments: Links to this post

Update:  On Tuesday aShortChronicle received a copy of an email to NCDOT and various state and local elected officials, including newly minted State Senator, Natasha Marcus of Davidson.  Per a response in this thread from project manager Theresa Elllerby:

"The symbol for a signal was inadvertently left off of the preliminary plans mapping presented at the public meetings.  Currently, a signal is proposed at the intersection of Davidson Concord Road and NC 73.    I apologize for any confusion or inconvenience.  This error will be correct and an updated map will be posted on the website." 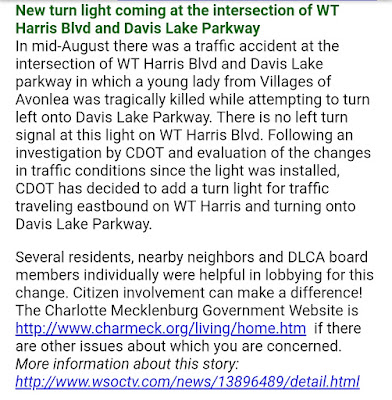 The above email from the Davis Lake homeowners association landed in the inbox of aShortChronicle long before this blog even existed.  It was back in September 2007.  Yours truly lived in Davis Lake when the tragic event described occurred.  Sadly, for those who lived in the vicinity of this accident, it was widely known that it was just a matter of time before this type of email had to be sent.  That left turn was dangerous.

As readers probably know, Harris Blvd in North Charlotte is a divided highway with two lanes in each direction.  Traffic regularly moves through that particular area at high speeds.  Making a left across two lanes of fast moving traffic is not for the faint of heart.  It was an accident waiting to happen.  Residents had been asking for a left turn signal at that light for a long, long time.  One showed up almost immediately after someone died, so that improvement - while welcome - was also bittersweet.

Unfortunately, this incident from 2007 is what immediately came to mind when seeing the proposed idea for a new "superstreet" intersection at Davidson-Concord Road and NC 73 as part of a $160 million project to widen NC73 from Huntersville to Concord.

The so called "superstreet" design for this project was unveiled to residents at loval NCDOT presentations in late January.  aShortChronicle passed along that press release here.  Comments can be submitted on the plan through this coming Tuesday per that release.

While the superstreet design is billed as a supposedly safer design option, it is hard to see how that is the case at this intersection.  Superstreet don't have left turns and minimize stoplights.  Below is a picture of what that means if one is implemented at Davidson-Concord Rd and NC73. 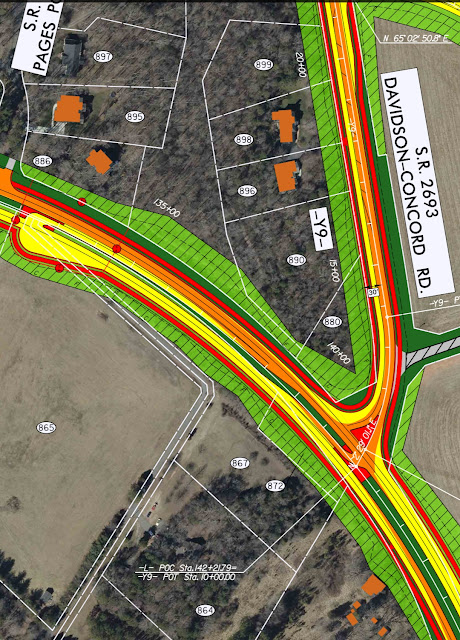 If you are thinking "that looks strange" you are probably noticing that under this design option there would no longer be left turns onto NC73 for drivers heading south on Davidson-Concord Rd.  Instead, drivers wanting to go East on 73 will instead be forced to do the following:


A simple one step process of turning left becomes a convoluted and likely hair raising five step process with that fourth step of doing a u-turn across two lanes of high-speed traffic looking eerily like the left turn in that fatal accident described from 2007 on Harris Blvd.

Add to that the fact that during rush hour a significant majority of the traffic approaching that intersection on Davidson-Concord Rd wants to go left, and you have the makings of an accident waiting to happen scenario.

That's a scenario that should be avoided at all costs.

Not speaking up now let's that decision be made in a vacuum by engineers at the NCDOT - engineers whose primary concern is moving cars and commerce as fast as possible along major roads like NC73.

However, they can be convinced to do what is best for the community if the community speaks out loud enough, forcefully enough.  Somewhat ironically, the best local example of that convincing also happens to have occurred in recent years along this very same stretch of road.

Long-time readers will remember what it took to get the speed limit lowered on Davidson-Concord Rd back in 2016.  The effort that finally rammed that issue through began with this blog post containing videos of how dangerous that situation had become.  It came after Davidson Town Hall had all but given up on the idea, but in the end NCDOT did the right thing and listened to what the public wanted because the public was adamant.

There are no videos of how dangerous this intersection is right now.  Right now the intersection of Davidson-Concord Rd and NC73 is not really dangerous.  It is just slow.   Engineers should focus on solving that problem, but the solution shouldn't come at the expense of making drivers take unnecessary risks on a daily basis.

If you think crossing four lanes of high speed traffic during rush hour just to make a left is dangerous, then get your comments in now.  Email comments to Project Manager Theresa Ellerby at tellerby@ncdot.gov.  Comments can also be submitted by phone at 919-707-6020 .

The correct type of intersection at this location will hopefully mean videos of close calls and more importantly emails like the one at the beginning of this post never have to be sent to anyone.
Posted by Rick Short at 7:54 AM 2 comments: Links to this post

DAVIDSON, NC -- Please share your voice to shape Davidson’s future as we develop a vision for our town. This fall the Town of Davidson began a comprehensive plan process, entitled What’s Next Davidson?, its first such effort since 2010. To officially kick-off Phase 2, the town hosted a well-attended community-wide workshop on January 17. If you were unable to attend, we encourage you to complete our second online survey on our website atwww.whatsnextdavidson.com by Sunday, February 10.Hard copies are available in the Davidson Town Hall lobby.

We encourage you to:

“We were incredibly pleased with the number of attendees at our January 17 workshop and appreciated the facilitation work of our table captains,” said Communications Director and Co-Project Leader Cristina Shaul. “The energy in the room created by input-sharing was a testament to the community members who care so much about Davidson, its future, and creating an overarching vision for our town."

The Davidson Board of Commissioners identified the comprehensive plan as a priority in their 2018-2019 Strategic Plan. A comprehensive plan is the leading policy document and tool to help a community create a vision and guiding principles for decision-making for their town. It covers a lot of topics ranging from housing and transportation to land use, economic development, environment, health, and other areas. It brings all these topics into one document that is then used by elected officials, town staff, and citizens to guide decisions about our community, such as:  How to prioritize what facilities to improve or construct (buildings, parks, streets); what types of land uses are appropriate for different areas of town; what types of programs should we encourage or offer (from government to businesses to institutions and nonprofits); and, how to ensure that our community’s values are represented in each decision made. Generally, comprehensive plans are updated about every ten years, but in high-growth regions such as ours they are often updated every 5-8 years. What’s Next Davidson? features many opportunities for public input over the next several months.

The comprehensive plan is a community-centered initiative. The planning process entails an extended community conversation that intentionally engages all stakeholders – residents, neighborhoods, businesses, the college, town government, non-profits, and institutions. Led by a consultant team comprised of Clarion Associates and Planning Next, the planning process will feature a variety of events, tools, and meeting formats to encourage community members to share insight into our community via in-person meetings/workshops, email, and online as well as hard-copy surveys. Whereas this fall will focus on background research and gathering input “where people are,” in the winter and spring of next year the town will host a series of community-wide events in which all are invited to participate. Together, each of these exercises will gather input essential to forming a community-wide vision and set of policies to support our aspirations.

Below is a summary of the process and anticipated timeline: