For the past few months as the WidenI77.org citizens group in North Mecklenburg questioned the effort to install HOT Lanes on I-77, the Mecklenburg County Republican Party remained noticeably silent on the subject.  To a degree, that silence was understandable considering the push to install these toll lanes is being led by local Republicans in the State Legislature.

This week that changed - culminating in a dramatic scene during Saturday's annual MeckGOP County Convention.

The resolution was submitted to the convention as one of only three public policy resolutions on the official agenda.  The fact that this resolution "made the cut" is a statement in itself.  There was at least one other resolution rejected by the committee.  Seeing that the Resolution Committee is made up of party insiders, the fact that they allowed this to be one of the officially presented resolutions shows a willingness of at least some in the party hierarchy to support alternatives to the current HOT lanes proposal supported by many Republican elected officials.

The HOT Lanes resolution was held until the end partly due to the expectation that it would be somewhat contentious.  The edited resolution was read from the podium and then the floor was opened for debate.

What happened next will be hard to ignore.

Then it was time to vote.

By a unanimous voice vote, the MeckGOP County Convention passed the resolution opposing the current plan for HOT Lanes on I-77 without further study.

It took a huge amount of political courage to submit that resolution to the convention, but speaking truth to power always does.  Saturday, that courage was unanimously rewarded.

Now that Republican elected officials have unequivocal proof that the path they have chosen is unsatisfactory to the party faithful, there is only one question left.


See below for a copy of the resolution received by aShortChronicle.  This was transcribed from a recording made by a member of the audience as it was read from the podium. 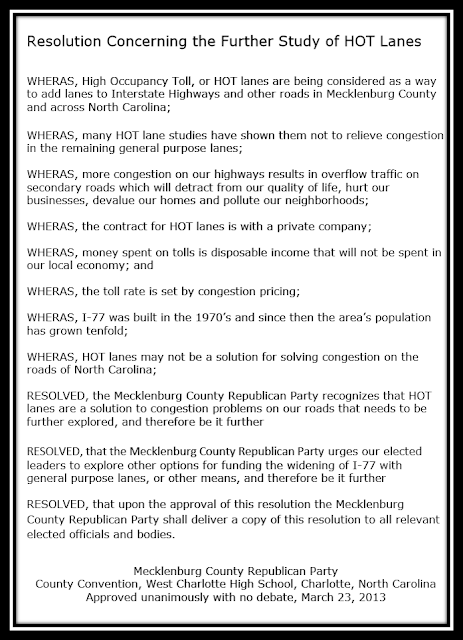