When the Davidson Board began meeting for off-cycle "special meetings" back in October, the public was told these meetings are about "team building".  Great care was taken to assure those interested that the meetings were open to the public. 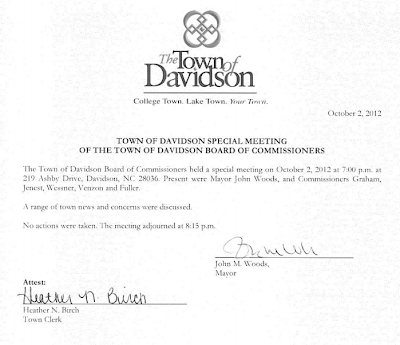 Taken at face value and based on the repeated assurances that these "special meetings" are all about team building rather than actually conducting Town business, no published agendas seemed necessary and no detailed minutes were necessarily warranted.  As long as conversation is about "getting to know you" topics why would they be needed?

Monday, all that changed.

Starting with an announcement on DavidsonNews.net on Sunday and followed up by this email early Monday, the purpose of these meetings appears to have turned towards more serious business - the 2014 budget, the tax base, and "priorities".

A series of email inquiries to Town Staff and elected officials failed to adequately clear up the matter.  Some said there was surprise at the "agenda".  Others, implied it was an agenda and a continuation of discussions that had been going on at recent "regular" meetings.

What was clear from some of the emails received Monday at aShortChronicle is that the public was not clear at all on what this meeting was intended to be.  Was this a meeting worth attending if you want to know about the budget?  Was this a real intended "agenda" for what are typically free-form agendaless meetings?  If so, would the discussion (if not any votes) be documented in minutes that were meaningful and would the meeting itself be covered by the media?

Running a government isn't a social club.  It's doing the people's business.  That should always be done in an open and transparent manner with as little confusion as possible.
Posted by Rick Short at 11:07 PM