It has been a tough couple of weeks for Davidson's central planners.

First, the Town was forced into removing its Adequate Public Facilities Ordinance (APFO) from the town's laundry list of development regulations. Then today, H150 passed overwhelmingly in its first real vote in the NC Legislature.

Make no mistake, the Town was forced into dropping the APFO  - regardless of the spin put on by Town Hall that it's removal does not signal a retreat from the town's commitment to controlling growth.  Removing this ordinance was primarily caused by consistent pressure from the courts that APFOs constituted a tax that municipalities in North Carolina are not authorized to collect.  In fact, Davidson itself had already lost one lawsuit against the APFO to the Developers of the Summers Walk - settling for pennies on the dollar of what the APFO had originally demanded.

In the end though, the APFO was mostly just about money.  What happened today with H150 in the NC House could strike at the heart of Davidson's efforts to control how every brick is laid and every shingle is shingled in town.

H150 in the House and its companion bill S139 in the Senate will place some serious limitations on the Town's ability to control design on new single-family residential development - at least that's the take by those at Davidson Town Hall.  These bills are retreads of a bill that stalled in the last legislature - Bill S731.  See this story from February about how this bill and Davidson's response to it were receive by it's primary sponsor Sen Dan Clodfelter (D-Meck).

In what appears to be a Don Quixote-esque quest to thwart these bills, the Town pulled out all the stops in preparation for today's first vote on H150.  Commissioner Graham (himself a builder) took to Facebook over the weekend encouraging people to write their legislators.  On Monday, the Town actually sent a blast email to residents encouraging them to do the same.  See here for a copy of the email.

If you were wondering why the Town sent the email encouraging citizens to take political action towards a very specific cause, here's the answer from Town Information Officer - Christina Shaul.

"Last year, when this bill was called Senate Bill 731, there was an official resolution that was passed opposing  this legislation, and it was sent to all of our legislators.  We hosted a meeting with the legislators to voice our opposition.  This is a continuation from last year.  More recently, with this new version (House Bill 150 and Senate Bill 139: Zoning/Design and Aesthetic Controls), there has been a lot of conversation between the mayors and commissioners of Huntersville, Cornelius, Mooresville and Davidson, because we are all still in opposition due to the architectural guidelines we all have in our ordinances.  Mayor Jill Swain of Huntersville spoke in opposition to the bill when it was in committee, and Leamon Brice was also in Raleigh last week to represent our mayor and board of commissioners because the position of the board has not changed since the last formal resolution."

However, all of the above effort went for naught when the votes were cast Tuesday.  In it's second reading, H150 passed 94-22.  Only one more reading and vote is necessary before this goes to conference or to the Governor's desk.

It's bi-partisan Legislative as well as industry supporters were quick taking to Twitter showing their approval... 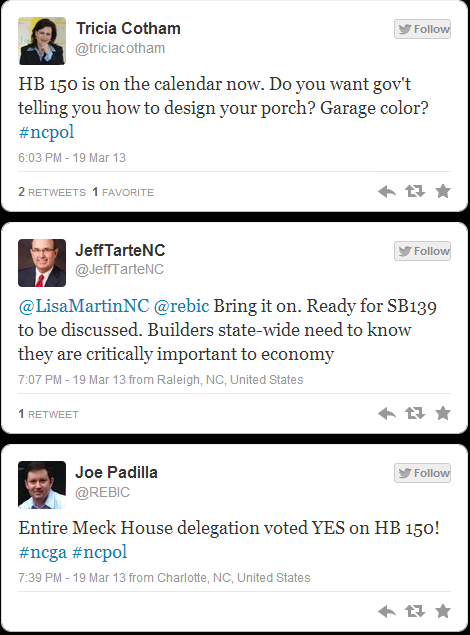 ...and things are not going to get better for the town planning set when S139 comes before the Senate.  Jeff Tarte's support is not limited to cheering tweets.  He's also one of the bill's primary Senate sponsors.