When the politicians get it right... 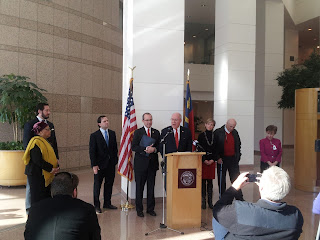 I give our local pols a fair amount of grief, but never let it be said I don't recognize when they get it right.

Today, they got it right. 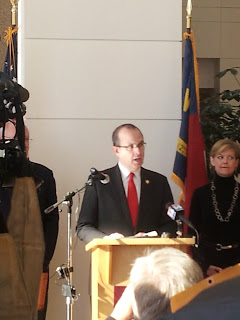 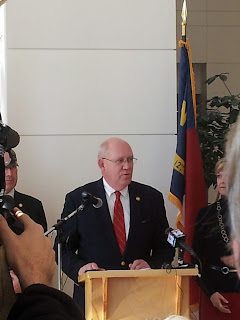 This morning at the CharMeck government center in Uptown Charlotte, State and County elected officials held a press conference where they unveiled for the media companion bills introduced today at the NC General Assembly - H200 and S159 - Require Certain General Reappraisals.  These bills are intended to repair the botched 2010 Mecklenburg County revaluation. 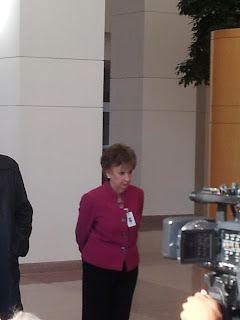 However, as tax bills their impacts if/when passed could affect up to 70 counties across the state.  Getting a revenue impacting bill to this point with such wide possible consequences is no small feat.  Also, the bi-partisan nature of this bill is critical.  Much has been said in the media about the inflated valuations in North and South Mecklenburg - heavily Republican areas.  Less has been said about some areas of the county where there were also widespread artificially low valuations - some of those are in heavily Democratic precincts.  In light of those facts, while the press conference was led by the dynamic duo of Senator Jeff Tarte and Representative Bill Brawley, both Republicans, much praise was given to the leadership of Meck BOCC chair Pat Cotham and several other Democrats were mentioned favorably for their contributions and support.

All involved deserve praise and recognition for doing what is right to correct what was done so, so wrong.

But maybe my favorite moment of the short press conference came near the beginning.  Senator Tarte opened his remarks by recognizing the citizen activists who drove this issue from the start.  People like Bob Deaton of Cornelius (standing between Karen Bentley and Pat Cotham in the top picture).  Senator Tarte was almost effusive in his praise of the work done by those activists - including former Cornelius board member Jim Bensman.

It was really nice to see that recognition.

The reality is that with all the heavy lifting that the politicians now appear ready and willing to do, this issue would not have been addressed if it was not for those activists.  If they had not stood up and continued to push for what is right, the press conference that occurred today would not have happened.

Maybe more than any event I've ever seen, this one epitomized good, bi-partisan government driven by active citizens to solve real problems.  I wish we could see it more often.
Posted by Rick Short at 9:15 PM