Saturday morning at the Mecklenburg Republican Party County Convention, a new slate was elected to lead the local party for the next two years. 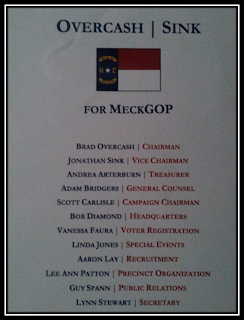 As was mentioned in this earlier post, at the February County Precinct Meeting there were originally two candidates interested in the top spot of Chairman - one from Pat McCrory's camp, the other from Robert Pittenger's.  Also, on the copy of that post over at PunditHouse.com there were rumblings from activist extraordinaire Adam Love of Campaign for Liberty that there may be a candidate from the "grassroots" who could possibly challenge for the leadership spot.

However, by Saturday that was no longer the case with only Brad Overcash officially throwing his name into the ring.  After Mr Overcash was officially designated as the next Chairman, he made a motion to forego elections for the remaining positions and presented his selected slate for the Board.

In a sign hinting at party unity there was no showdown over who would lead the party through the next election cycles.

Congratulations and good luck to the new Board!

Bonus Observation: As "Chairman of the Convention" Charlotte City Councilman Warren Cooksey put on a great performance as Master of Ceremonies for the day.  His knowledge of the minutiae in the rules of parliamentary procedure was impressive.
Posted by Rick Short at 2:29 PM

Email ThisBlogThis!Share to TwitterShare to FacebookShare to Pinterest
Labels: MeckGOP