Questions for the Davidson Cottages Public Input Session on Wednesday

Last Thursday, Davidson Town Hall put out the below notice for a public input session for the new Davidson Cottages project as part of the Davidson Commons East development that includes Woodies.. 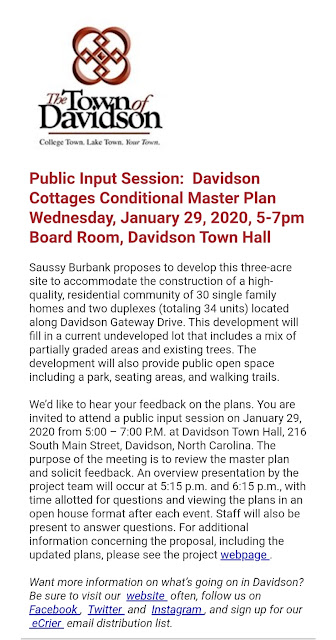 As stated before, the Davidson Cottages project seems like one that meshes well with the surroundings.  It's close to the commercial and transit services at Exit 30.  It will include built affordable housing and market price housing at the more affordable end of the spectrum for Davidson.  It also has a quality builder/developer in Saussey Burbank.

The only obvious drawback from the perspective of aShortChronicle is the possible/expected use of "density averaging" to achieve the planned footprint.  From the Town website on the Board of Adjustment page density averaging (also known as built upon area (BUA) averaging) is described as

Built-Upon Area Averaging is a program whereby parcels located within a protected watershed may obtain additional impervious coverage rights by averaging the total impervious area of the developing lot with the total impervious area of an undeveloped/less developed lot within the same watershed. Essentially, the "receiving lot" obtains additional impervious square footage allowance when the "giving lot" establishes a non-revocable easement containing undeveloped, vegetated area. The amount of this easement area may be transferred from the giving lot to the receiving lot by Final Plat recordation, subject to applicable criteria and processes. Davidson Planning Ordinance Section 17.8 outlines the process and requirements for obtaining a Density Averaging Certificate, which must be approved by the Board of Adjustment.

Another way to look at this is it is a gimmick to benefit developers that has little to nothing to do with water quality. Less expensive land, possibly unbuildable land, can be bought for relatively cheap then "set aside" to allow more density on high dollar land.

Any developer desiring to use density averaging should present the exact potential donor lot or lots that might be a part of any such equation in its public information session.  Would these donor lots be buildable at the same scale?  If not then density averaging doesn't really add value from an overall water quality perspective.  In fact it could take away value if the donor lot is unbuildable anyway and would never have impervious development but "saving" it allows more density elsewhere.

Importantly, under the current Davidson ordinance the final density averaging decision does not occur until a Board of Adjustment hearing after the rest of the plan is approved.  This sets up the situation where a lot of time and effort has been expended before the BOA hearing.  What are the chances the BOA turns down the request for density averaging at that point?  There will obviously be a lot of pressure on them to approve.  It would be much better if this was done earlier, but it is not.

With this particular development there is also a lot of history on the subject already.  aShortChronicle would like to see a full explanation of the history of this project and the possibility of using density averaging at the public information session.  It is very unlikely that will happen however.

Public records requests completed over the past few years show that the possible use of density averaging on this parcel has been under discussion as early as late 2016 during the swirl around the neighboring Griffith Street Hotel project. Records show there have been multiple times the density averaging subject on this particular parcel was planned to go before the BOA - as early 2017 - in both July and October of that year.  Former Town Attorney Rick Kline was engaged by the developer for this 2017 work.  The October 2017 hearing was suddenly pulled at the last minute in what appears to be a Town decision, but the record contains no explanation of why.  However, the latest records request received earlier this month also appears to be incomplete.  If this idea was pulled by the Town in 2017, why would the Town even be considering it now?  Was there a process mistake in 2017 that required it to be pulled or some other reason?  These concerns were all presented to elected officials last week for comment, but none has been received as of this posting.

Again, the Davidson Cottages project seems like a very good one.  This isn't really about that.  However, in the interest of transparency for this project and future ones, all of these concerns about how the Town and Town Staff handle these things need addressing.
Posted by Rick Short at 7:34 AM