At the February 11th Davidson Town Board meeting there was a lengthy discussion on the proposed widening of NC73.

Town officials discussed a draft resolution covering 7 items of concern - a list that was eventually expanded to 8.  The list spanned everything from landscaping to affordable housing to historic preservation to mobility to development and yes, most importantly, public safety.  This list and draft resolution was the result of several officials attending an NCDOT meeting for public officials back on January 27th.  An open house for the general public was held on the 28th.

For Davidson residents who travel through the NC73/Davidson‐Concord Rd intersection and for those who live on the east side of Davidson along NC73 the safety and mobility issues will likely bubble to the top of this lengthy list of concerns.

aShortChronicle reported on the proposed lack of left turns at the NC73/Davidson-Concord Rd intersection a year ago in February of 2019.  See here for that story.  The update to that story indicated the issue had been resolved with a signal at this intersection and that the lack of left turns was an "error" on the map.  However, based on the discussion at Davidson Town Hall last week that error now seems to be the actual plan with the NC 73 widening project - no left turns a NC73/Davidson-Concord Rd.

It was mentioned that this no left turns plan could possibly change if there is development on the Huntersville side of this intersection on the south side of NC73.  There is apparently an unnamed developer for an unnamed project looking at that location who would be on the hook to do a traffic study showing that a left turns across NC73 is warranted.  However, Town Manager Jamie Justice stated that may just be for left turns on the road crossing NC73, and not for left turns from NC73 onto Davidson-Concord Rd or into this new development.  Those lefts would still need to use the u-turn format of passing the intersection then doing a u-turn and coming back to it to make a right.  See below for the pictures of how this will work. 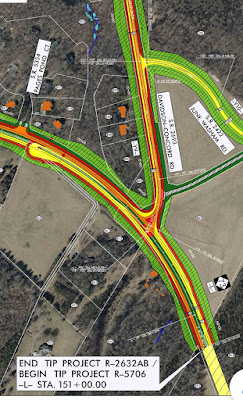 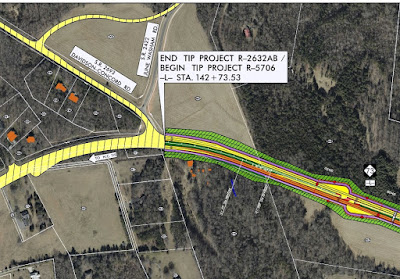 The primary safety concern with this intersection stated at last weeks meeting has to do with public safety response, particularly for swift access to the Davidson East and Summers Walk neighborhoods on NC73.  Davidson Fire and Police service will have to navigate these unwieldy intersections that needlessly add distance and increase response times.

Unfortunately, this plan by NCDOT should surprise nobody.

This is not the first time NCDOT plans have sacrificed safety for Davidson residents for the benefit of pushing a little more traffic a little faster on area roads.  Long-time readers of aShortChronicle may remember the fight to reduce speeds on Davidson-Concord Rd as another recent example.

NCDOT initially did not want to reduce speeds from 55mph on sections of this road down to 45mph south of Beaver Dam.  They also didn't want to reduce the speed to 35mph from there into downtown.  It took a concerted effort by citizens to make the case and stand up to NCDOT staff to get this done.  Ultimately, it took bringing NCDOT staff to Davidson Town Hall to hear directly from the people to get the job done.

In addition to passing a strongly worded resolution, Davidson Town Hall should consider doing the same thing now and request NCDOT come to speak to residents.  Resolutions are nice.  They may even be necessary, but Davidson passed plenty of resolutions on the speed limit reduction before it got done.  Ut took citizen involvement to make that actually happen.
Posted by Rick Short at 5:30 AM