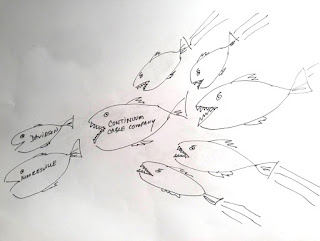 The sale of Continuum in late 2019 was arguably the most positive financial decision in Davidson town history.  It freed taxpayers from endless $1 million per year subsidies.  It extracted the town from the cutthroat telecommunications industry where there was little likelihood of long term success.  It also allowd the town to focus its financial energy where it needs to be in the future - providing critical public services such as Police, Fire, and Parks.

For all these reasons voters approved the sale of the company this past November with 94% voting yes to getting the company off the books.

However, that doesn't mean discussion of the company and its various financial impacts is quite over at Davidson Town Hall.  On Tuesday's agenda, the Board is set to hear an update on the disposition of proceeds from the sale.  aShortChronicle has received information that this may not be the entirely positive discussion that most people would expect.

The word received here at aShortChronicle is that multiple outside government bodies as well as some private entities are looking to get what they see as their respective pieces of these proceeds, and the numbers are not small - potentially running into the millions.

If true, this would significantly eat into any one-time infusion of cash Davidson receives from the proceeds of the sale.  This of course would not make the decision to sell Continuum a bad idea.  Getting into the cable business was the single worst and most damaging decision in the town's history, so getting out of that situation was an imperative at any reasonable cost.  However, it would be highly disappointing and should lead citizens to wonder why this wasn't known to the public before the referendum.

aShortChronicle contacted the Town last week in an attempt to confirm this information.  Town Communications Director, Amanda Preston, declined to provide that confirmation stating only that the Board would be receiving an update on Tuesday.

This is one post where aShortChronicle really hope's the information received was off the mark, but if it was not, then Town Staff will certainly have some explaining to do.  Citizens should be on watch to see how forthcoming Staff is in this update.  aShortChronicle certainly will.
Posted by Rick Short at 6:22 AM