When the I77 HOT Lanes issue once again caught fire two weeks ago with the release of new information from NCDOT on potential toll rates, things got hot around North Mecklenburg among elected officials as well.

As reported here last week, Davidson's Town Board declined to have a special meeting to discuss the issue.  What may be even more interesting is the amount of water carrying done by the North Mecklenburg Mayors with some help thrown in by NC House Speaker/Republican US Senate Candidate, Thom Tillis.  Together, Mayors John Woods, Jill Swain and Chuck Travis - along with Speaker Tillis - formed a bucket brigade to put out the flames.

aShortChronicle obtained several emails outlining how the North Mecklenburg Mayors took the lead in attempting to stem the revolt brewing among the towns' Commissioners.  Even with their efforts, 9 of the 16 Commissioners ultimately signed a letter to Governor McCrory and NCDOT requesting a delay in signing the Commercial Close for the project - a request that was ultimately ignored.

As part of Mayor Woods's response to the special meeting request in Davidson, he indicated he would reach out to his fellow "regional mayors".  These emails appear to be the result of that effort to squelch the "hoopla" caused by the "well organized anti-group" - Mayor Woods's words to describe those opposing tolls.

After a weekend of activity, Monday evening Mayor Travis from Cornelius sent the below message to the Mayors of Davidson, Huntersville, and Mooresville in response to a message from Huntersville Mayor Jill Swain. 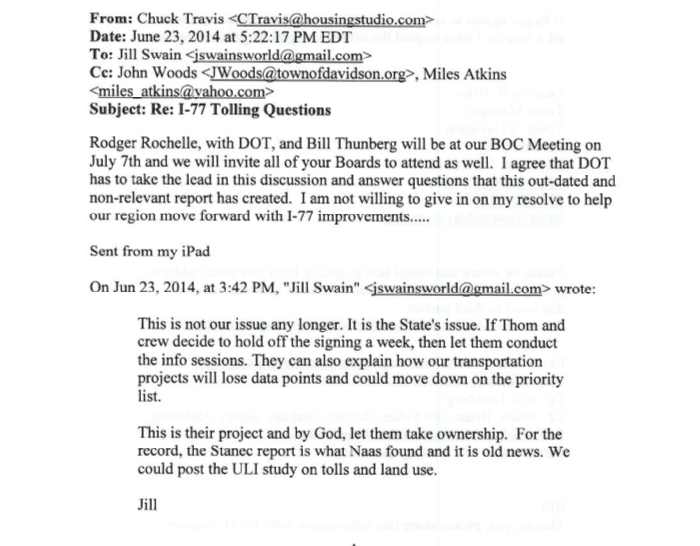 Notice how the release of more information on the I77 HOT Lanes project is described as "non-relevant" and "outdated".  Mayor Swain even calls it "old news".  If it's such "old news" why is it that just about every news outfit in the region and state is just now reporting on it?  When the Stantec report supposedly wasn't "old news" in 2012 it certainly did not get much public attention.  Maybe this "old news" was communicated to the Mayors in one of the closed door meetings with consultants like this one specifically designed to avoid public meetings law?  In a separate email, Davidson town manager, Leamon Brice, laments about the NCDOT not giving them a heads up this information was coming out.  Truly "old news" would not cause such concern.

Also, notice how Mayor Swain dumps this project squarely in Speaker/US Senate Candidate Thom Tillis's lap saying "this is their project, and by God, let them take ownership."

Well, apparently the Speaker did just that.

See the below email just a few hours later from Cornelius Mayor Travis.  This is on a separate email thread that includes the Speaker (with everyone using their elected office email accounts this time). 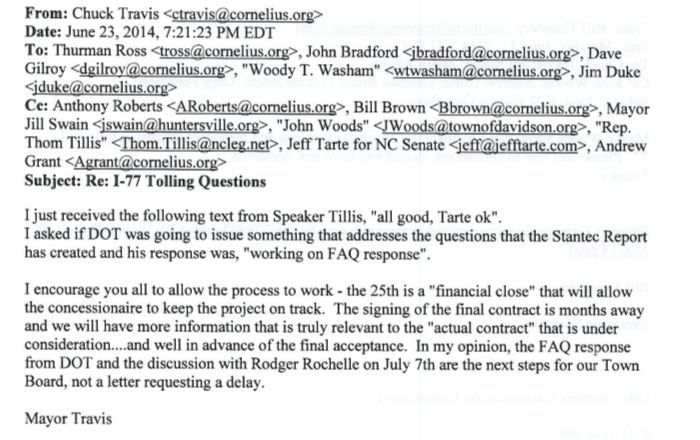 Notice the repeated references to text messages with the Speaker, and the Speaker's apparent indication that Tarte is "Ok".  That would seem to be a reference to Senator Jeff Tarte.  The next day Senator Tarte would tell the Charlotte Observer that a legislative review would be conducted before the final, final, we really mean it this time contract is signed with Cintra later this year.  This request for review was done "with the support of legislative leaders".

While we should all be glad an additional review is going to take place, the legislature has had opportunities to force a real review - aka a VOTE - on specific toll road projects.  That was in the form of HB 267 last year.  Read these stories to get a refresher on how the Legislature avoided going on record - H267: George Orwell Comes to Raleigh AND H267: Redux - NC House really, really, really doesn't want to vote on tolling you.  With Senator Tarte and other leaders still strong supporters of the project, it's hard to see any review at this point as anything but a bit of kabuki theater.
Then finally, Monday night there's this desperate plea from Mayor Woods to the Davidson Town Board.  It's an obvious reference to the letter the nine area Commissioners were contemplating sending to the Governor and NCDOT.  He is all but begging them not to sign it. 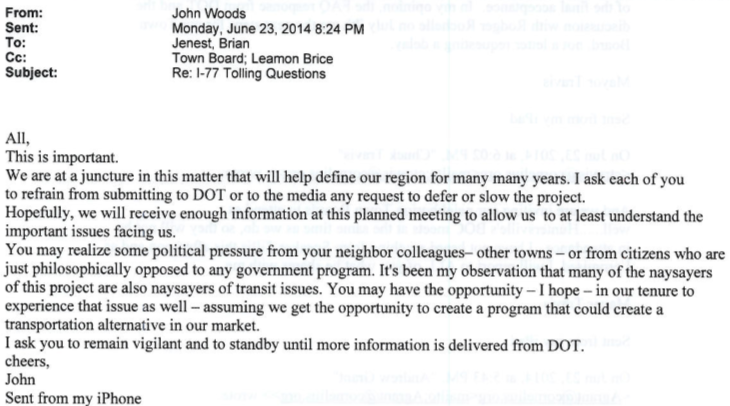 After once again smearing citizens who oppose HOT Lanes by calling them "naysayers", Mayor Woods attempts to sway Commissioners by alluding to possible participation in a "transit" project - for those here in North Meck that's an obvious reference to the Red Line Commuter Rail - a project that can best be described as "his baby".  He makes this statement even though as Chair of the Red Line Task Force he knows that less than 48 hours later at the Wednesday Metropolitan Transit Commission meeting it would be announced Norfolk Southern has all but killed the Red Line project with its latest announcement that takes track sharing off the table.  Why he decided to tie these two projects together is anyone's guess.  When we reported on the rumored linkage here last year, there was definite push back against such insinuations.  (In any event, Mayor Woods was off to Raleigh this week to see if he could save the Red Line.)
The irony of all this effort to stop a letter from nine Commissioners to the Governor and put out a sudden wildfire?  The letter had already been sent a few hours earlier.  It went out late Monday afternoon.
As the I77 HOT Lanes project moves forward, it's likely the "Bucket Brigade" (aka the North Mecklenburg Mayors and Speaker Tillis) will be called back into action.
We'll be watching.
Bonus Observation:  The passing the buck on this issue continues. In this week's issue of The Lake Norman Citizen there is an article on HOT Lanes. (link not available)  According to Huntersville Rep Charles Jeter, there's nothing, just nothing the General Assembly can do at this point.  Of course, Rep Jeter also voted against giving the NCGA the authority to vote on specific toll projects back during the debate on H276.  Read the H267 links for the details on that.
Rep Jeter repeatedly says this issue is now with the "executive branch" - meaning Governor McCrory and NCDOT.
The response back from the "executive branch" to the 9 Commissioners' letter?  Crickets...nothing...nada.
Posted by Rick Short at 12:00 PM