HOT Lanes: Disagree with Davidson Mayor John Woods? You are a liar or a scaredy cat!

We've recently been pretty rough on Davidson Mayor John Woods.  But with all his recent squashing of debate at Davidson Town Hall and colluding with the other North Mecklenburg Mayors to push the much maligned HOT Lanes project forward, it's criticism well earned.

However, his most recent quote in the Lake Norman Citizen takes the cake.  It shows an utter disdain for anyone who disagrees with him whether they be a citizen or a fellow elected official.  Referring to those who oppose the HOT Lanes plan for I77 Mayor Woods says... 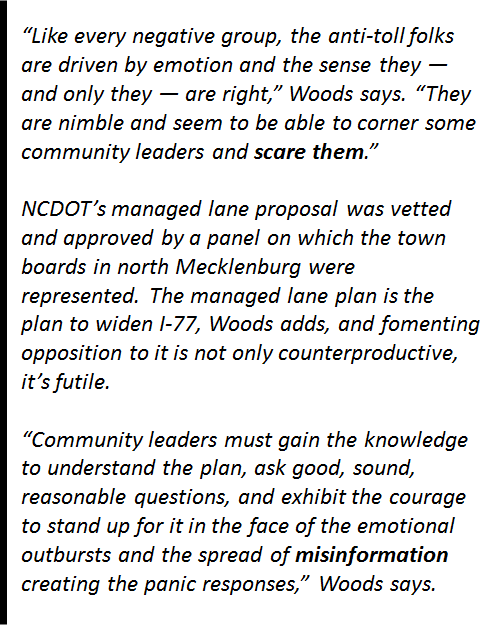 If you ever disagree with Mayor Woods, you can be sure that he'll toss out the "misinformation" accusation at the earliest opportunity.  Tellingly, this accusation is never accompanied by exactly what the misinformation was or what the correct information should be.  He sort of just throws it out there and lets it hang in the air to color the debate.  It's nothing but a polite way to call someone a liar without using the word.

Ironically, he has a long history of using this divisive tactic on major local issues where he's the one who turned out to be wrong.

In 2012 regarding the now sidetracked Red Line commuter rail project, John Woods had this to say in DavdisonNews.net  ... 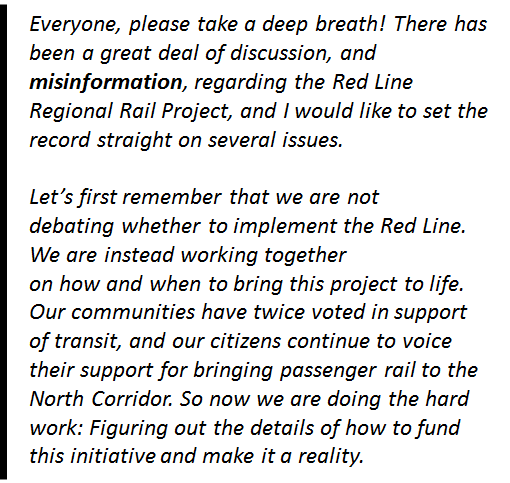 While John Woods may think the debate is over regarding commuter rail, the actual owners of the track, Norfolk Southern, obviously would disagree.  The rail road company recently put the kibosh on track sharing in the corridor which effectively kills the project unless hundreds of millions in new funding appears, or the State gives them a sweetheart deal on their permanent use of alternative track currently owned by the North Carolina Rail Road.  Additionally, Mayor Woods himself recently said at a Community Chat in Davidson that the current financing plan for the Red Line - the financing plan he was defending in the above quoted article - is "dead"

Were those opposing the Red Line in 2012 spreading misinformation? Or were they right?

Let's go even further back in time to 2007 and we'll find, John Woods saying this to DavdisonNews.net about the oh so successful Mi-Connection deal he helped push through. 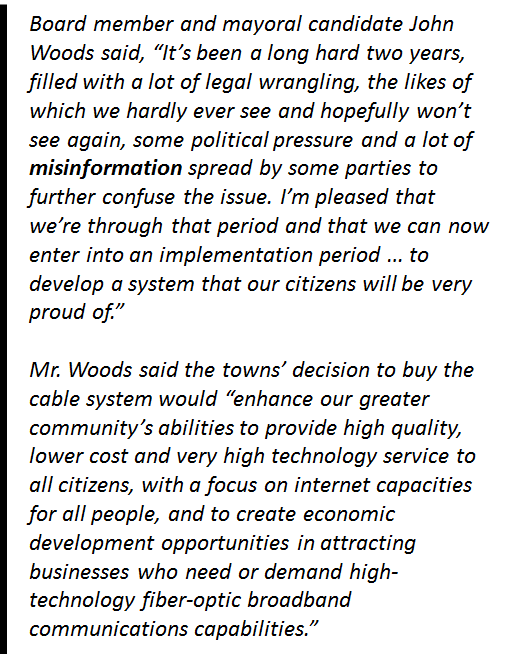 For those in Davidson who have had to suffer with the fallout of the terrible decision to enter the cable business, this one should be particularly bile inducing.  This decision pushed and supported by John Woods nearly bankrupted the town.  It has cost the town dearly in lost opportunities as millions upon millions are poured into the operation to bail out the politicians who foisted it on the citizens.

Some of the Davidson locals who opposed this disaster had experience in high finance, technology, and telecommunications.  One such person, former Mi-Connection Chairman, John Venzon, opposed the decision to create the company, but he then had the courage to step in and spend years cleaning up the mess John Woods helped create.

Again, were those opposed to this decision spreading misinformation, or were they right?

Mayor Woods has recently become the face of the HOT Lanes project among local elected officials.   He is the project's most vocal champion, and so the "misinformation" accusations start flying.  This time however, he's taking the rhetoric one step further claiming other leaders have somehow become "scared" by HOT Lanes opponents - by people who are simply asking questions and demanding information about a project that will impact their lives for decades.

Let's be clear.  The other elected officials who are questioning the project aren't scared.  They are doing their jobs to protect the citizens who elected them - a job that Mayor Woods has failed at repeatedly in the past.
Posted by Rick Short at 6:18 AM