On Tuesday, Davidson's Board will hear an update on the recently completed Mecklenburg County property revaluation, and the numbers are BIG.  According to the Town presentation attached to the agenda item, the town's overall tax base increased 31.1%.

If the tax rate rate were to stay the unchanged at 35 cents per $100 in value, that would translate directly into at least a 31.1% aggregate increase in tax bills.  The good news is that while we know certain staff like to entertain the idea of "value capture" as a way to increase tax collections by not lowering the tax rate to what's called revenue neutral, an average tax bill increase of this size from Davidson is unlikely.  Instead, the Town likely will lower the rate somewhat resulting in bills that will be smaller than they would if the rate was left unchanged.  The goal for taxpayers should be to push the Board to adopt what is called the "revenue neutral tax rate" or RNTR

So, what is the RNTR and how is it calculated?  The answer to that is much more complicated than you might think.  To get into the gory details check put this post from the UNC School of Government, but here is the gist of it.

So what would the RNTR be for Davidson?

aShortChronicle asked that question of the Town in early February but was told it wasn't available yet.  Per former Public information Officer, Christina Shaul, "the Davidson Board of Commissioners have their budget/finance retreat from March 14-15, so I’d recommend getting in touch with Jamie Justice the week of March 18 to get the latest information on their thinking related to the revenue neutral and other tax rates."

aShortChronicle fully intends to follow-up on that question, but in advance of that, a quick analysis was done looking at the calculation spreadsheet supplied by the NC Treasurers office for municipalities to use.  You can see the spreadsheet here.  The spreadsheet requires one piece data, average growth rate, that will need to be calculated by the Town, but assuming that rate falls between 2-5 percent, Davidson's revenue neutral rate would be somewhere between 27.25 cents and 28 cents.  Incidentally, Davidson's population has been growing at about 2% per year in recent years, so hopefully the rate is on the lower end of this range.

Unfortunately though, things aren't that simple when it comes to actual individual tax bills, and some people, maybe a lot of people, will still see significant tax bill increases even if the Town has the financial discipline to implement a revenue neutral rate.  That's because not all properties change at the same rate, not even close.

Take a look at the below heat map from the Mecklenburg tax assessor's presentation showing how much properties increased across town. 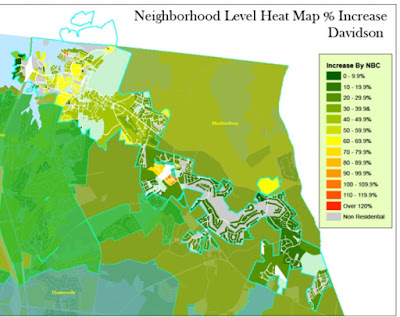 In coming months as the Board discusses what to do when setting rates for the next budget cycle, keep an eye on this.  Since almost all of Davidson's naturally occurring affordable housing exists on the West Side of Town, the Town will likely try to see how it can mitigate the impact of tax changes and tax payers need to ensure it is done fairly.

NOTE:  The above only covers the Davidson portion of the overall tax bill.  The bigger portion is from Mecklenburg County whose Board will almost certainly be nowhere near revenue neutral - ensuring the pain from the tax man this year is fealt by pretty much everyone.
Posted by Rick Short at 12:04 PM