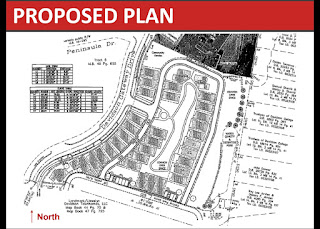 Three weeks ago at the Davidson Town Board meeting on Tuesday, February 12th, a proposed new development was discussed on Davidson Gateway Dr.  The project would use the 3+ acre parcel on the south side of Woodies furthest from Griffith St as the last remaining parcel owned by Davidson Commons East LLC.  This is part of the same overall conditional planning area that includes Woodies and the two parcels for the controversial Griffith Street Hotel project.


At the meeting, Developer Saussy-Burbank was seeking feedback from the Board in what's now called a Pre-Development Consultation.  Having this kind of meeting in public is something new under the current Board which allows the public an early view into upcoming possible projects.  The discussed plan has 38 units, mostly single family homes, but it also includes a few duplexes.  The developer is interested in removing the conditional zoning designation and using the underlying Lakeshore Planning Area zoning.

The houses would include affordable housing built on site as part of the project - an increasingly rare thing in the current era of payment in lieu.  The price point of the market rate houses would also provide more affordable options in the town center than are currently available.  However, to achieve the desired density, the developer is looking to take advantage of what's called density averaging.

Density averaging is a process whereby a developer is allowed to overbuild on one parcel while permanently acquiring and preserving pervious area on another parcel in the same watershed area.

In this case the available allowed impervious area on Lot 4D as part of the Davidson Commons East development is an issue because the overall allowed impervious area is allotted to the entire development, not the individual Lots A-D.   Since the controversial, Griffith Street Hotel is still on the books as it works its way through the courts, there isn't enough impervious area left to accommodates this new projects without employing a gimmick like density averaging.

While this meeting in February of 2019 was the first public information provided on the project, public records show that something has been in the works for quite some time on this parcel.  Back in 2017, aShortChronicle obtained records showing this same developer discussing a project requiring density averaging on the same parcel.  The records from 2017 also indicate concern from Town staff regarding moving the proposed earlier project through the density averaging process at that time.  These requests are approved by the Board of Adjustment in a "publicly advertised meeting" that might draw "special attention".

Readers will remember in 2017, the controversial Griffith Street Hotel project was yet to be approved by the former Board.  That project was not approved until after the 2017 election in a lame duck vote by former Commissioners Beth Cashion, Rodney Graham, Brian Jenest, and Stacey Anderson.  Only Jim Fuller who was reelected voted against approving it.  The hotel approval has been challenged in court, and the citizens bringing the case won the initial decision.  The case is currently waiting for an decision on an appeal by the land owner and hotel developer.

Now, we have this new project on a different parcel that is part of the same overall development.  This new project however is constrained by the hotel approval which is still on the books as it works through the courts.

The combination of all these things poses an interesting trade off for the current Board whose members were not elected when most of these events occurred.  They are faced with supporting a residential project that will provide more affordable housing options, including built AH program units, but the cost of that very well may be using density averaging which raises concerns about water quality.  Furthermore, the density averaging is only necessary because of the controversial Griffith Street Hotel commercial project.  Finally, the benefit of the density averaging process accrues almost entirely to the landowner who may not be able to sell the property as easily without it.  However, that landowner also consciously chose to be in this situation by allocating such a large portion of impervious area to the hotel project.

The easy solution to all this is to simply not make any decisions on this new project until there is a final decision on the Griffith Street Hotel.  If the hotel project goes away, there is no real issue for the new Saussy-Burbank project as more impervious area would be available without resorting to density averaging.  Considering a residential project by Saussy-Burbank at this site has been under discussion for years now, not just recently, waiting a few more months seems like a small price to pay before the Town makes any decisions.
Posted by Rick Short at 6:26 AM