In a jam packed agenda on Tuesday, Davidson Commissioners heard an update on Town Hall's new public facilities plan - the plan Commissioners are unlikely to let citizens vote on via a GO bond.

Here's what changed as far as costs go. 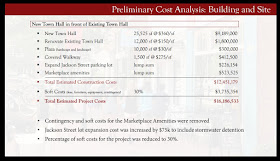 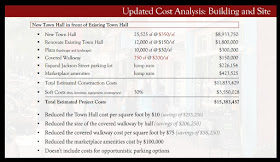 Not much in the way of change as far as the cost of the plan. (Note: The first cut at preliminary analysis has a 35% soft cost number.  These use 30%.)

This slide compares the Davidson plan with the Cornelius Town Hall project from 1999. 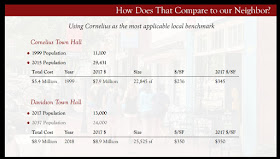 Notice, Davidson is building a bigger Town Hall than Cornelius for a 20 year projected Davidson population that will still be significantly smaller than what Cornelius has now.  That means for the next 20 years Davidson Town Hall will have some relatively palatial digs on a per capita basis compared to its more thrifty neighbor.

And how much will this cost the taxpayer?

That statement came from the finance impact presentation for the project.  Here's what that means.

In 2019 Mecklenburg County will do its required property tax revaluation.  Per Piet Swart, the Town Finance Director, Davidson expects the reval to say property values in Davidson have gone up well more than 15% since the last valuation.  He didnt give a more exact number.

If Davidson was to keep its property tax collections revenue neutral, it would have to lower its tax rate to bring in the same dollars based on the new higher valuations.  Currently, Davidson is at 35c/$1000 in value.  To pay for the new Town Hall without a rate increase Davidson will have to "capture" at least a 15% increase in revenue by not lowering the rate enough to keep tax collections revenue neutral.

If you ever hear someone from Town Hall say the new Town Hall project is being paid for without a tax increase, they are lying to you.

The tax rate might not go up.  It might even go down slightly after the revaluation, but if it does not go down enough to keep collections revenue neutral, then it is a de facto tax increase.  You will be paying 15% more on your Davidson tax bill to pay for the public facilities project as it was presented Tuesday - all without being allowed to vote on it.

However, also to be very clear, even if you were allowed to vote on a bond for this project, if the costs didn't change, the same math would apply.  Bonds aren't free money.  They have to be repaid, so the same tax increase would be needed.

What voters would really be voting on (if allowed) is this question.

Does Davidson Town Hall really need a facility this size and scope when compared to its neighbors?

To his credit, Commissioner Jim Fuller seems to be the only Commissioner willing to ask that question to voters.  Last week, aShortChronicle asked the five Commissioners if they supported putting the New Town Hall funding up for a GO bond.  Four of them replied, all saying "no" to that question.  The one who did not reply to the email was Jim Fuller.

On Tuesday night, Fuller was the only one to broach the subject of putting this up for a GO bond.  He pointed out that this project is bigger than the Town's annual budget as justification.  That's the same point made in this post from aShortChronicle - "GO Bonds: Where is the line?"

Regardless of how this ultimately turns out, and frankly it's not looking good for voters, it's nice to see at least one of the electeds seems to "get it".  For that, aShortChronicle would like to thank Commissioner Fuller for standing up for voters when the rest of the Board clearly will not.
Rick Short at 8:32 AM
Share