Roy Cooper's lead in the NC Governor's race ballooned on Monday as more updated vote totals rolled in to the NCSBE.  As of Monday night, the lead stood at 9,716 votes according to the NCSBE website.

And almost as if on queue, Monday afternoon Pat McCrory’s campaign manager, Russell Peck, sent out an email asking for money to fight the tide. Regular readers of aShortChronicle will remember Peck from these posts here and here.

In an email titled "Formal Appeal", Peck makes what sounds more like a desperate plea for cash as time appears to be running out.

Over the weekend, attorney and registered Durham County voter Thomas Stark filed a formal appeal with the State Board of Elections in relation to the ‘malfeasance’ in tabulating approximately 90,000 ballots that were reported just before midnight on Election Day.It was concerning to learn that the Durham County Board decided to not approve Tom Stark’s protest to recount early vote totals from election night.The malfunctions and irregularities in Durham have been extremely troubling to this campaign and the people of North Carolina, and the State Board confirmed several errors. We are now left with no other position but to request the State Board of Elections expeditiously order a full recount of Durham County early vote totals.
We need funds to help us finish the job. Please contribute to the Legal Defense Fund TODAY!Russell PeckTeam McCrory


The "malfunctions and irregularities" in Durham County may be troubling to Peck but they weren't the biggest problem for the campaign he was managing.

Take a look at the below numbers from the counties with the 4 largest cities in NC. 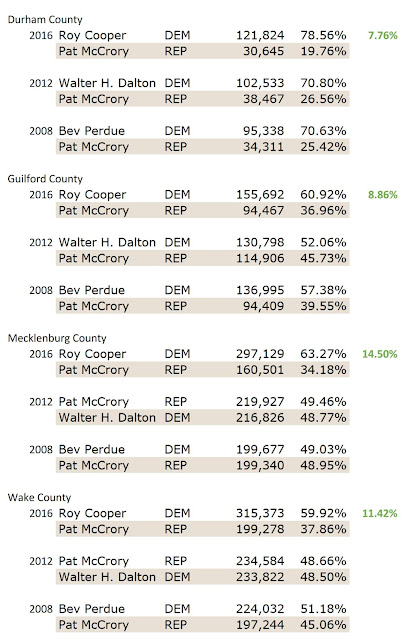 Of the four metro area counties, the vote share for the Democrat candidate was up the least in Durham County compared to 2012.  That's both in percentage terms and in raw numbers.  You'll also notice that Durham is consistently overwhelmingly Democrat with the Dem candidate capturing over 70% the past three election cycles.

Even if the recount request eventually does goes forward in Durham and even if it finds some issue, it doesn't pass the smell test that enough erroneous votes could possibly be found there to overcome Cooper's growing lead.

Rather than writing a check to Mr Peck, the fiscally conservative thing to do would be to keep one's money safely in their own bank account.
Posted by Rick Short at 9:04 PM