2016 shaped up to be one of the closer Presidential elections in memory.  Hillary Clinton wins the popular vote while Donald Trump wins the Electoral College with many of his winning states coming by incredibly close margins.

With all of these being true, how can this be a "landslide" election?

The answer to that question can be found in two articles from the NY Times.  The first article was published a few days before the election and the second article a few days after.  These articles covered the growth in "landslide counties" since the 1992 election with a county defined as "landslide" when either party wins the county by 20% or more.

In 1992 both parties had a little more than 500 such counties across the country.  After 2012 the Democrat landslide counties dwindled to 281 while Republican counties exploded to 1724.

In 2016 the trend continued and even accelerated in some areas.

Here are the statistics from the two NYTimes articles put into a chart. 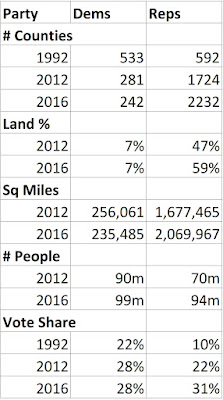 A few things jump out from these numbers in 2016.

The most stark depiction of the impact of these changes in 2016 can be seen in the second linked article from the NY Times.  Click the above link and take a look at the maps.

Since 1992, only one major area of the country had resisted the change in the overall move towards a predominance of landslide counties.  That area was the Upper Midwest including the states of Michigan, Wisconsin, Minnesota, and Iowa. The rural areas of those states remained as non landslide areas over the last 5 election cycles.  In 2016 that changed dramatically.  Michigan and Wisconsin have gotten all the press coverage because they helped give the election to Trump, but even true blue Minnesota went rural red this election with the final spread under 2%.

CNN's election page allows you check out the totals at the county level if you are interested in more detail.

This overall change in landslide counties tells the tale of this particular election.

The next post will look at what that might mean when it comes to the Electoral College and the inevitable discussion where people claim this election "permanently remade the map".
Posted by Rick Short at 6:00 PM

Email ThisBlogThis!Share to TwitterShare to FacebookShare to Pinterest
Labels: 2016 Election