With Labor Day and Summer in the rear view mirror (despite what the daily 90 degree temps might say) and with Fall and Football now officially here, it's also time to kickoff election season.  In Davidson, with a lightly contested election for the Board and uncontested Mayoral race, the action is centering around two referendums.

The first is a required vote on the sale of Mi-Connection (aka Continuum) after an offer was announced in August.  This vote would seem to be a near certainty to pass as it would remove a long existing sore spot for the Town.

The outcome of the second referendum is arguably much less certain.

In this one, Davidson Town Hall is seeking citizen approval to issue $14 million in bonds for "public facilities".  Specifically, the Town wants to use the bulk of these bonds to refurbish the 251 South Street property to be the new Town Hall with the remainder of this money going towards upgrades to the existing Town Hall building for police and fire.

$14 million is a lot of money and certainly not guaranteed voter approval.  With that in mind Davidson Town Hall is engaging in an extensive "education" program in support of the referendum.  As indicated in the below slide from the September 9th Board meeting, citizens will likely hear the word "education" a lot since open advocacy for the bonds as part of official Town business is not allowed. 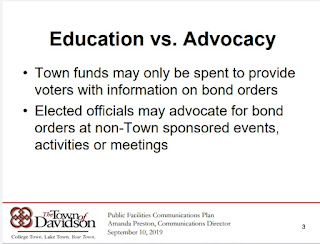 At that meeting earlier this month, Town Public Information Officer, Amanda Preston, provided an update to the Board on a communications plan to support this "education", not "advocacy", for this vote.  That full plan can be seen at this link, but here is a summary:


There is a fine line between "education" and "advocacy" when it comes to allowable activities surrounding referenda.  Comparing the significant effort put towards "educating" the public on the expensive Public Facilities bonds versus the virtually non-existent effort being put towards the arguably more important referendum on the sale of Mi-Connection makes one wonder if the Town has crossed it.
Posted by Rick Short at 7:39 PM