Could vs Would vs Should...Regarding Town communications on Public Facilities and Mi-Connection referendums

The "apolitical" Facebook page "Positively Davidson" recently dove headlong into the political realm by asking the below fundamentally political question.

We've always stayed apolitical on Positively Davidson, and this post isn't meant to break that streak. With the (likely) impending sale of Continuum, and the subsequent payoff of outstanding debt and the elimination of Davidson's annual $1 million subsidy, we'd like to get your opinion on what Davidson should do in the upcoming budget season.

Option 1 is to basically give the subsidy back to the citizens via a property tax reduction. Based on 12,000 citizens, this would work out to a little less than a quarter a day for each citizen.

Option 2 would be to utilize the freed up subsidy on infrastructure projects such as sidewalks, greenways, and roundabouts, and also to invest in affordable house. Let us know your thoughts. Please only take the poll if you are a resident of Davidson. Thank you!

Below are the results.  Take them for what you will based on the small sample size of 71 responses.

Whether this poll is fairly worded or not though is somewhat irrelevant.  Private citizens or groups have a lot of flexibility in how they promote their positions.

The same can't be said about how the Town itself must handle communications on things - election related items specifically. Davidson's Town board had an extensive discussion on the topic of how to spend the money freed up by the pending sale of Mi-Connection at last week's Town Board meeting.

Here are those options from the Board agenda: 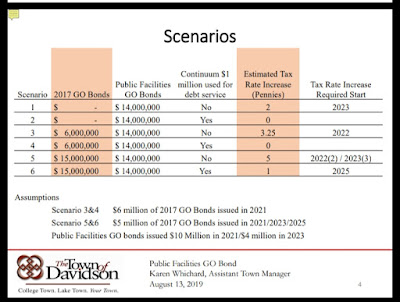 It should be noted, neither Positively Davidson nor the initial Town Hall list mentioned eliminating the Town solid waste fee which was implemented years ago to free up money for Mi-Connection subsidies.  Frankly, that should probably be at the top of the list.

Specifically, last Tuesday's conversation was mostly around how to direct Staff in communications with citizens on the possibilities for addressing a number of Town spending priorities.  Much of the conversation was driven addressing Commissioner David Sitton' s concerns that the Board was even discussing this at all in light of the fact that the Mi-Connection/Continuum sale is not finalized yet, and therefor, the actual money available is not known.

Sitton's position was essentially that the Board was putting the cart before the horse discussing how spending any potential freed up money from a Mi-Connection sale could/would/should be communicated when voters haven't even weighed in yet.  Sitton stated repeatedly that the Town should just stick to communicating  the facts and tell citizens the new Town Hall project will cost 2 cents on the tax rate while the sale of Mi-Connection will save the Town 4 cents on the rate.  Rather than muddying the waters by commingling subjects that will be voted on separately the Town should be as succinct and clear as possible.

aShortChronicle wholeheartedly agrees with that position.

Not only should the Town always strive to be clear, it is the opinion here at aShortChronicle that commingling all these topics into a single communications plan in an election year when all Commissioners are also up for election gets seriously close to breaking the restrictions on the Town advocating for the referendums.  The NC General Statues prohibit the Town from doing that sort of advocacy.

Here is why this gets murky.

The cost of the new public facilities bonds on the ballot will be two cents, but by implying in any way the Town could or would use the savings from a Mi-Connection sale to offset these costs, it makes it look like the cost of those Bonds is really zero. That would be misleading.  What if a future Town Board uses the freed up Mi-Connection money to lower or eliminate the solid waste fee which was implemented years ago to free up money to help subsidize Mi-Connection?  (Commissioner Campbell mentioned that as a concern that exists in the community.)  The Board very well might not have enough money to cover what is mentioned in any communication if the messages are commingled.

Add to this the fact that all Commissioners are also on the ballot with these referendums, and it gets even more muddled.  As a voter, if you want to ensure whatever is communicated as a "could happen" with the Mi-Connection money, the subtle implication is that you better vote for all the current Board members as well.

To be very clear no Commissioner implied that, and it probably didn't even cross anyone's mind.  However, it is a logical conclusion.

By commingling the communications to citizens around these issues it could be seen as promoting a certain outcome for both referendums on the ballot as well as the election for the Board itself.   aShortChronicle suggests the Town look at this information from the UNC-SOG before deciding exactly what and how to communicate with citizens.

Keeping it simple, could also keep the Town out of hot water with the Board of Elections.
Posted by Rick Short at 9:56 PM