Election 2017 in Davidson will be remembered as the year a political earthquake struck North Mecklenburg's smallest town.

With preliminary results in from the State BOE website, Rusty Knox has won a major victory over incumbent Mayor John Woods and former Mayor Pro Tem Laurie Venzon.  Receiving just under 57% of the vote gives Knox a clear mandate to lead the town.  In fact, it is hard to overstate the impressiveness of this victory.  Receiving a an absolute majority of votes in a 3 way competition is hard.  Doing so as handily as Knox did on Tuesday against two well known opponents is a mandate. 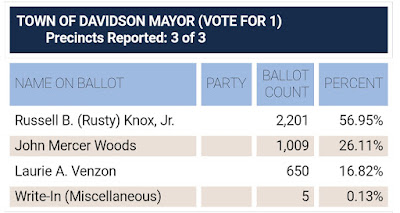 In the race for Commissioner, things are equally as startling.  Going into Tuesday the Davidson Board was guaranteed 2 new Commissioners due to open seats left by Beth Cashion and Brian Jenest not seeking reelection.  Coming out of Tuesday, Davidson will be getting 4 new Commissioners as both incumbents Stacey Anderson and Rodney Graham lost in their bids for another term.  With the difference between 5th and 6th place being only 8 votes the final outcome could be in flux if there are enough provisional ballots, but here are the results as of midnight Tuesday. 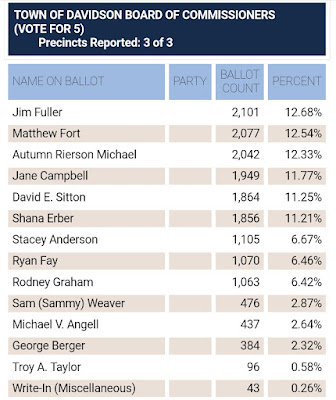 Incumbent Jim Fuller was the top vote getter.  However, with only 237 votes separating Fuller and 5th place finisher David Sitton, the new Board has a solid base of support under all members..  After 6th place finisher Shana Erber, support falls off significantly including that for incumbents Anderson and Graham.  Like the results in the Mayoral race, this solid victory for new blood candidates shows a clear desire for a change in direction at Town Hall.

On Wednesday, when there is a bit more time to reflect on what this all means, there will be some more interesting threads to analyze in this evolving story.  However, tonight congratulations to all the candidates are in order.  Running for office is hard and everyone doing so should be commended.

This was a particularly tough campaign with so many candidates and a significant amount of controversy.  Here's hoping everyone involved sees these results for what they really mean and acknowledge it is time to bring this community together and move forward.

Email ThisBlogThis!Share to TwitterShare to FacebookShare to Pinterest
Labels: #DavidsonElection2017