No Rest for the Wicked...More Negative Adds in NC-09

Yesterday and today the blizzard of negative paper for NC-09 continued.  I guess the polls must have made it clear a run-off was inevitable.

This time the attacks on Jim Pendergraph come from a group called "Citizens for Conservative Leadership, Inc" which sent out similar attacks earlier in the campaign.  The PAC was formed just this past March and all of its expenditures have been in the NC-09 race.

This one completely crosses any lines of common decency - using an image of a cowering child to hammer home it's message. 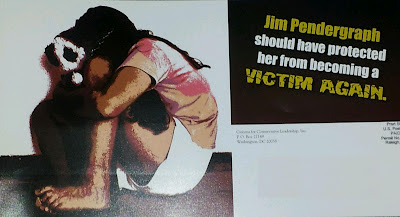 Now that there are only two candidates in this race, Robert Pittenger should renounce these adds and this support since there's no mistaking that these benefit only him.

We "should" hear a denunciation of these by Pittenger.  What we will hear instead is crickets.
Posted by Rick Short at 11:14 PM