Long awaited Davidson Fire Station #2 on the way in October 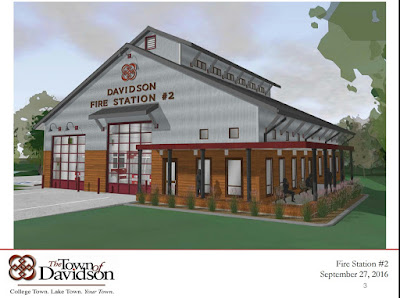 For years Davidson's East Side has needed its own fire station.  Now, the wait is almost over as the town nears finalization of plans to start construction on town-owned land next to the Beaver Dam House on Davidson-Concord Road.

At Tuesday's Board meeting Fire Chief Bo Fitzgerald and Assistant Town Manager Dawn Blobaum reviewed the final costs and discussed the contractor selected to build the project with a possible start date sometime in late October.

Contractor Pro Construction of Jacksonville, NC was the low cost bidder coming in at $1.87 million.  After some "value engineering" and adding in some scaled back "soft costs",  the total project will be $2.13 million.

This is expected to be a 50 year solution for the town's needs, but there is room on the site to expand if needed.

Commissioner Rodney Graham asked about the selection of a builder that was not local.  To that Blobaum responded that state rules require the town to select the lowest cost "responsive and responsible" bidder.  In this case, that was Pro Construction.  Not only did they come in lowest but they have experience building fire stations.  Blobaum also pointed out in this case because of the good drawings the town had on hand, all of the bids came in within a tight range with only $140,000 separating the lowest to highest bids.

This project will eliminate the need for the town to continue its contract with the Odell fire department in Cabarrus Co.   Odell had been covering the far eastern part of Davidson to allow for a better ISO rating for that part of town which greatly helps insurance rates.

After going around the room to get "nods" of agreement - to be clear not a "vote" just "nods" - the Board indicated staff could move forward with the last phases of the contract preparation.
Barring something unexpected, the Board will  vote on the contract for Pro Construction at its October 11th meeting.  Construction could begin any time after that.
Posted by Rick Short at 10:30 PM