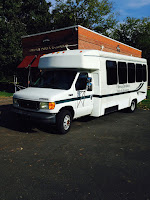 After just two weekends, Davidson's new Saturday shuttle is expanding to cover both the East and West sides of town starting September 17th.

When the free shuttle service launched  September 4th it ran one route from the River Run soccer field on Davidson-Concord Road into the Farmer’s Market.  Unofficial reports were that it carried just under 50 riders on that inaugural day and that it included s mix of people who typically drove to town as well as people who did not usually go at all due to the parking situation on Saturday mornings.

However, there were also some complaints (again unofficial) that the service didn't cover the West Side of town.  This weekend that will change - along with the run times.

The new schedules appear to be organized to allow a single bus to serve both routes.  This means longer times between inbound and outbound on each route, so don't miss your departure unless you have another hour to kill.  The good news is that when you catch the bus in you will have at least an hour before the next bus back.  That's plenty of time to hit the Market or catch a quick breakfast.

Route 1 will depart from the Farmer’s Market lot on Main Street at the following times:

There will be two additional stops as needed on Route 1. They are:

Route 2 will pick up at Portside Drive in Davidson Landing at the following times:

Route 2 will depart from the Farmer’s Market lot at the following times:

There will be two additional stops as needed on Route 2. They are: