On Wednesday, HB954 passed the first of several major milestones on its way to becoming law.  The bill, filed by Huntersville Rep Charles Jeter as soon as the session opened, would cancel the contract with Cintra to build the I77 HOT lanes.

After weeks since filing, the bill was finally heard in the NC House Transportation and Appropriations Committees.

In both cases the bill passed on voice votes.

Here is what Rep John Bradford had to say after the bill passed these hurdles.  The Appropriations Committee was the second committee vote of the day. 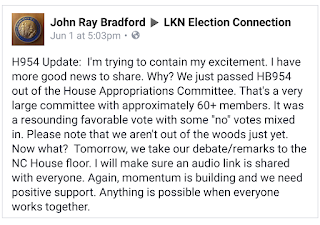 Rep Bradford's excitement is very understandable.  That's because the Committee process is where unpopular or controversial bills often go to die.

Committee rooms are where the political sausage is made.  Amendments are proposed. Voice votes are taken.  Much of the action is often not documented all that well.  If a bill is going to be stabbed in the back, this is where it happens.

Passing through that gauntlet intact is no small achievement and all those involved deserve the community's hearty appreciation.

As a frame of reference, check out the stories on HB267 back in 2013.  See here and here.  That bill would have required a vote by the General Assembly on each toll toad project.  The bill went into committee as an anti-toll effort and came out as a pro-toll bill.  The legislature never had to go on record voting for this specific project.

Three long years later, the first of those on-record floor votes at the NCGA for this project will happen Thursday when HB954 heads to the House floor.

Correction: The original post got the days off.  The bill passed committee on Wednesday, not Tuesday.  It heads to the House floor on Thursday.
Posted by Rick Short at 6:35 AM