Yesterday, we told you about the trip Davidson Mayor John Woods and Cornelius Mayor Chuck Travis made to Raleigh on Wednesday to speak with Senate President Pro Tem Phil Berger on the I77 HOT lanes.

From reading reports on social media and speaking with those familiar with the meeting, it was a damaging trip directed at thwarting the efforts of citizens attempting to stop the toll project

Here's what he has to say in in an noontime email response to aShortChronicle. 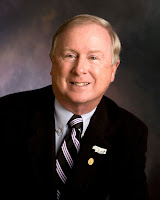 "I went to Raleigh on June 8, 2016 and met with Senators Berger, Tarte, Curtis, and several others. At no time did I speak on behalf of the Davidson Board of Commissioners or the citizens of Davidson; I voiced my own opinions on the need to improve traffic congestion in our region."

Ok.  So in other words, nothing to see here.

Mayor Woods was not speaking as "Mayor Woods" or for the Town Board when he went to see arguably the most powerful elected official in the Great State of North Carolina.  No.  He was just good ol' "John Woods" voicing his "own opinions".

How about you or I try to get a meeting with that group of officials?  Do you think we'd even get the time of day if it was just to give our "opinions".

To say this is not a credible response from Mayor Woods is being generous.  Davidson's Board should not, must not, accept it.

You can be sure citizens won't.
Posted by Rick Short at 12:51 PM