aShortChronicle previously told readers about the wave of outside money flowing into local races for the NC General Assembly.

Specifically, we've covered the dark money operation called NC Families First which has been hitting NC 98 Rep John Bradford on the I77 tolls issue.  While aShortChronicle HQ appears to have somehow gotten off the mailing list for this outfit (we wonder why?!?!), our readers tell us the mailers are still coming.  They have shifted gears somewhat and moved on to other topics however.  Maybe that has something to do with the fact Bradford recently received multiple endorsements from anti-toll advocates exposing the misleading nature of those earlier flyers.

Attacking Bradford hasn't been the only mischief NC Families First has been up to though.  Republican candidate Danae Caulfield has also been targeted in the neighboring NC92 race.

Caulfield, a former Huntersville Commissioner, entered the race late after Rep Charles Jeter resigned suddenly back during the summer.

As a candidate, she has also been targeted by NC Families First. 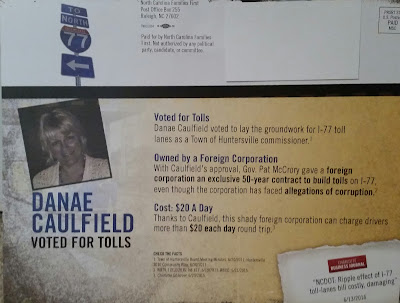 Since Caulfield has not been an elected official since 2011, it's hard to see how she "voted" for I77 tolls.  So, where could that attack have originated?

Well, Caulfield did vote for the award winning 2030 Community Plan in Huntersville as a Huntersville Commissioner.  That plan did have a section on transportation.  The thing is, that transportation section wasn't about tolls, and it was barely about I77.  Instead the biggest project, the one where Public Private Partnership was mentioned as part of the plan, had to do with the Red Line Regional Rail project.  See below. 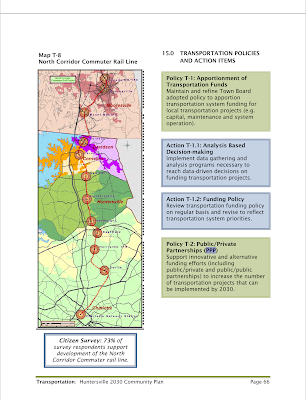 So, Caulfied is being skewered over tolls on I77 by dark money from an outside group because she voted for something that didn't have to do with I77.

One of the anti-Caulfield mailers featured a picture of local anti-toll activist Ron Vanderbilt of Huntersville saying "we can't support politicians who backed this raw deal." 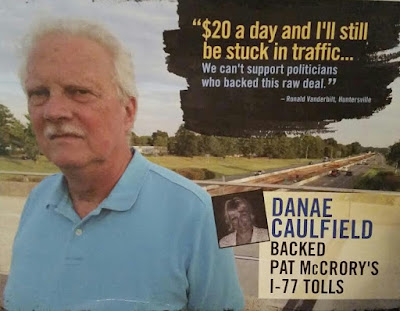 As further evidence of the honesty deficit in
these flyers, the I77 Business Plan endorsed both Caulfield and her Democrat opponent Chaz Beasley in the race for NC92.  The I77 Business Plan recently endorsed a bi-partisan list of candidates in the upcoming elections, but this race was the only head-to-head race where both candidates were endorsed.

These flyers from NC Families First are prime examples of what turns people off to politics.

As such, Democrat Chaz Beasley should disavow these misleading efforts clearly intended to benefit his campaign.  Not doing so does a disservice to voters and tarnishes the endorsement from the I77 Business Plan.

However, this is politics, so holding one's breath on that one is not recommended.
Posted by Rick Short at 6:17 PM