"If you are having the worst day of your life, by the time you hang up the phone we want you to hear sirens coming."
-Bo Fitzgerald, Davidson Fire Chief 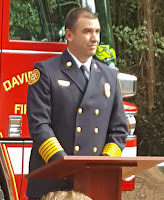 With construction starting early November the new single company station is scheduled to be operational by Summer of 2017.

According to the Chief, currently some Davidson residents are as much as 15 minutes from the Downtown station, and this new station will cut that response time by an actual Davidson fire company by more than half.  To accommodate for the current long response time, for several years Davidson has been contracting with the Odell station in Cabarrus County to cover the eastern end of town.  Completion of Davidson Fire Station #2 will allow that relationship to change to one of mutual support, rather than the town having to contract out the primary protection responsibility. 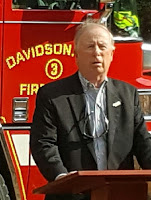 During his comments opening the ceremony, Mayor John Woods commented how this project has been a long time coming.   Waxing nostalgic, he recounted one story of how the siren at the Downtown station used to be tested every day at 5:30pm, telling kids it was time do head home for dinner.  He also took the opportunity to introduce some special guests including County Commissioner Pat Cotham and NC98 candidate Jane Campbell both of whom are running for office this election cycle. 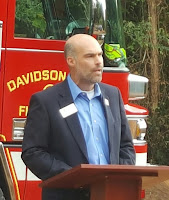 Town Manager Jamie Justice also said a few words, thanking staff for all their hard work bringing this day to fruition.  While the project started before his tenure, getting this done as Justice nears his 1 year anniversary as Town Manager is certainly a nice accomplishment.

The roughly $2.126 million project will be financed partly via a 15 year installment loan up to $2 million to cover construction.  The town will cover equipment and furnishings separately.  It's the largest municipal facility built since Town Hall was constructed 20 years ago and actually takes the top spot in terms of cost. 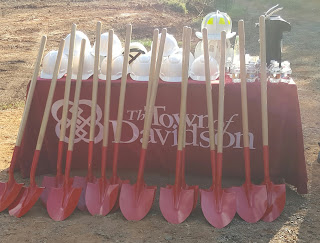