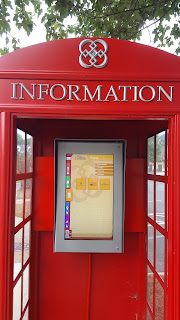 In June, the Public Information Kiosks (aka the Red Phone Booths) on Main Street in Davidson finally came to life.

Reader reaction to them on Facebook varried from mild amusement to serious outrage at the cost.  aShortChronicle reported that the cost was about $25,000, but a reader quickly indicated that Town Hall had told him the total cost was actually $42,000.  On further investigation the $25,000 figure was to "complete" the kiosks in FY2016.  There was also a budget allocation in FY2014 for $26,000 for 3 kiosks, so the higher figure is likely correct since only 2 were installed.

Regardless, it's a LOT of money for what it provides.

One would think Town Hall would want some detailed reporting out of these high tech devices to make sure it was at least providing the most value possible.  After three months in operation, aShortChronicle checked in with economic development manager, Kim Fleming, to see how things were going by asking for the detailed metrics.

Here's what we got.

That comes out to about 11 sessions per day.

When asked for more detail Fleming responded with "what I sent you is what is available."

Really?  Just one raw number over the life of the system?  That's it?

No breakdown of which pages are most viewed?  What days of the week get the most views?  Nothing about whether or not there were major spikes in sessions when the kiosks first launched or when Davidson College students returned to town?  How many average daily views were there if those outliers were excluded?  Also, no explanation of why the count started at June 13 when the kiosks weren't announced to the public by the town until June 23rd.  Does the total number of sessions include testing prior to launch?

Just a raw number that comes out to 11 "sessions" per day.  That's all  That seems odd.

Always in search of "the rest of the story" as Andy Rooney used to say, aShortChronicle contacted Nvisionative in Mooresville.  That's the firm that actually performed the programming for the kiosks.  According to the tech there, the kiosks use Google Analytics which would provide much more detail than just a total raw number - detail that would answer most of the questions asked here.

Maybe the Town just doesn't know how to use the software.  Maybe the tech at Nvisionative doesn't know what their own software actually does.  Or maybe, when you've spent that much of other people's money on something like Red Phone Booths, it's best to just not ask (or answer) too many questions.
Posted by Rick Short at 7:59 PM