Update May 11th:  The town public information officer reached out to aShortChronicle today to let us know the delay in posting this information was due to a lost email.  Approval for distribution had been granted, but the information just had not gone out.

In fact, for a blog a significant amount of effort goes into ensuring mistakes don't occur.  Town staff can attest to that based on the flurry of questions they regularly receive.  However, every now and then they do happen, and when they do corrections need to be made.

A couple weeks ago we reported that Mi-Connection subsidies would total $3.5 million in FY2017.  That was incorrect.  The correct number is only $3.05 million.

The error occurred due to how a question asked to town staff was phrased.  The question was answered, but should have been asked slightly differently.

The error was discovered when we came across the below figures in a stack of handouts on the information table in the entrance to Town Hall. 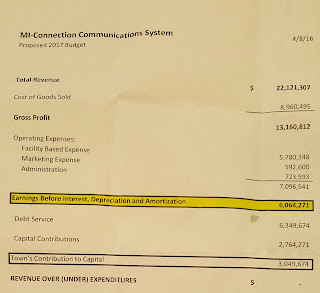 After looking back in the town press releases, Facebook postings, budget materials, and the most recent town newsletter since April 8th, it appeared this information has not been widely distributed.  As far as we can tell, no media has reported on it.

When asked why this had not been distributed, the town Public Information Officer said she was waiting to hear back from MI-Connection CEO David Auger before distributing.

Yet, there it was in a stack of printouts for public consumption in the Town Hall lobby.

Overall, the new numbers don't impact the current budget discussions as Mi-Connection related expenses won't change for FY2017 from what was previously reported here.  Davidson still pays $1 million this year, and very likely will  in FY2018 as well.  However, it does show that with the current rate of improvement Davidson could see a significant drop in that $1 million per year expense as soon as FY2019.

That would be important particularly if Davidson embarks on a large capital spending program for new facilities using millions in debt financing.  The freed up cash could be used to prevent the town from having to raise taxes even higher than they already are.

Overall $3.05 million is still a lot of red ink, but things are moving in the right direction and moving a bit faster than previously reported.  That's  welcome news.

It should be noted that the numbers on the sheet say "proposed budget".  Things of course could change again.

Update:  At 3:28pm Monday within hours of this post going up, the Town put out the above numbers in a press release.  Again, the same numbers dated April 8th - a full month ago.
Posted by Rick Short at 5:07 AM