#CatalystProject: Price tags for revised "options" on Tuesday Board agenda 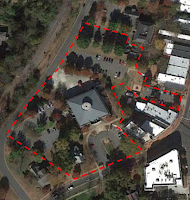 Readers will remember discussions at the marathon Town Board meeting in April on the proposed revised "options" for the Town's controversial "Catalyst Project".

After hearing from residents in a series of roundtables earlier this year, the idea of a hotel as part of the project appears to have been jettisoned.  However, Commissioners asked the consultants from DFI to look at multiple other scaled back options and put price tags on them.  As was mentioned in April by Town Economic Development Director, Kim Flemming, the project under these revised options would take on a decidedly more publicly financed flavor.

As part of Tuesday's Town Board agenda, Commissioners will hear a presentation about that public "price tag" depending on which DFI option (if any) are ultimately chosen.

Here are the new option comparisons. 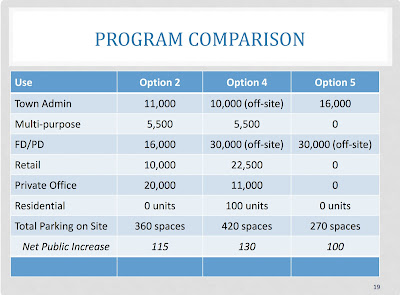 Here is the highlight slide on costs. 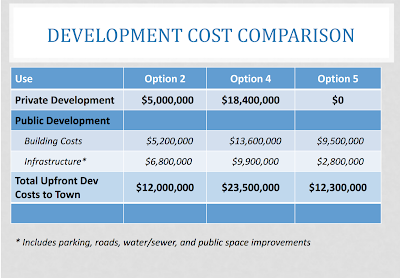 Here is the highlight slide on revenue. 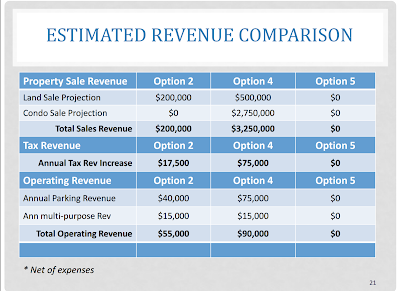 Those revenues however won't come close to covering the costs.  Below are the possible tax increases that may come along with each option. 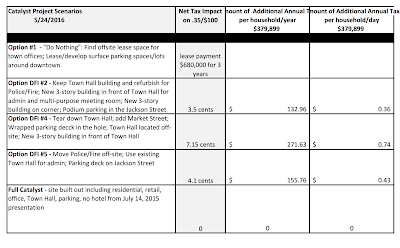 As the town heads into the final turn for negotiations on the FY2017 budget, taxpayer need to keep an eye on this one.   The Board has discussed placing a bond referendum on the ballot this November for Park/Greenways and Roads/Sidewalks.  Add tax increases from those bonds (if they were to pass) to these numbers and it could add a good chunk to local tax bills.
Posted by Rick Short at 7:36 PM