And the survey says....No dogs at Davidson Farmers Market!

After a posting of the pictured story from the Herald Weekly on Facebook, Nils Lucander of Davidson posted a poll question on the subject of banning dogs from the Davidson Farmers Market to the "Exit 28 Ridiculousness" Facebook group.  While certainly not a scientific poll, one day later the results were somewhat startling. 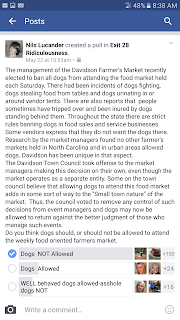 Apparently, the high level of concern at Davidson Town Hall over how the ban was implemented would appear to be overblown.  By a margin of 6-1 responses favor the ban with a smaller number saying it should be on a case by case basis.

Davidson Commissioners have a lot on their plate right now.  It's hard to believe they wanted to add micromanaging events to it.

aShortChronicle wondered if the ordinance change passed on May 10th was retroactive and would override the DFM Board's decision.  Per the town, the answer to that question is "no".

So for now it looks like dog owners should keep their pets at home when heading to the market on Saturday mornings.

Here is another story on the no dogs policy from the Lake Norman Citizen.