About that so called "business" "support" for Davidson Griffith Street hotel 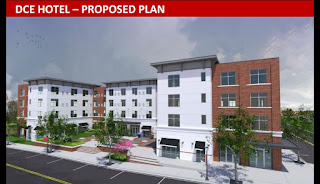 The plan to put a new 4 story Hyatt Place hotel mere feet from the Community School of Davidson and across the street from Davidson Day School has generated a lot of media coverage lately.

About the only group that seems to "support" this project is "business".  Both "support" and "business" are in quotes because there is definitely some question about whether local "business" actually "supports" putting a hotel right next to two schools.

Yes, Lake Norman Chamber president, Bill Russell, and Visit Lake Norman Exec Director, Sally Ashworth, recently spoke up in favor of the project.  What would you expect?  They both are paid to promote business.  Visit Lake Norman actually gets a hefty chunk of its funding from the hospitality tax that hotels generate.  Of course these people will support it.  They won't have to deal with any of the potentially negative consequences of this decision, but as the saying goes, they know on which side their bread is buttered.

More tellingly is the nature of the so called "support" from the local "business" community presented by the development team's attorney, Susan Irvin, at the September 12th public hearing.

While certainly some business owners likely are not concerned about the serious issues that have been raised with the project, the most obvious way to look at a list this size is to say "just 19 businesses?"   That's actually a very small percentage of the businesses in town.

However, that percentage actually gets smaller when one takes a closer look.  aShortChronicle reached out to several businesses on the list.  We also know others who have been doing the same.  What we found out is this.

It was confirmed general questions were asked, not something specific to the site or this project.  Questions like "Would a new hotel be good for your business? and Does Davidson need a new hotel?"  One small business owner added a humorous take on the generic wording of the questions saying "they were like asking a five year old if they wanted an ice cream cone.  Of course the answer is yes."

Punching another hole in the actual level of business support, we also came across multiple cases where a member of the business's staff and not the actual business owner or senior management responded to the questions.  When they realized what had happened, these business owners told aShortChronicle their businesses don't take positions on issues like these.

Those were for the small businesses on the list.

The list of supporting businesses also included large local corporations like Ingersoll Rand, Lowes, and MSC.  These three corporations even had slides in the developer's presentation in an attempt to give it a certain air of authenticity.  However, a close reading of these slides makes it clear the same generic questions asked of the smaller business were posed to the larger corporations.  None of the slides mention this specific project or mention the proposed Hyatt Place for example.

aShortChronicle was particularly interested in the response from MSC because the company had been contacted for a story back in 2016 on the corporate opinion on this specific project.  Director of Communications, Paul Mason, responded recently with this feedback. "Consistent with our exchange last September, we would endorse the overall need for more hotel rooms and meeting space in Davidson, but we do not take a position on city planning matters with regard to a particular location, etc."

So, taken all together, the so called "business" "support" presented by the development team hardly presents a convincing argument in favor of Davidson Commissioners granting a conditional approval for this project.  The developers trotted out people who are paid to spin things in favor of business.  The so called "support" presented as fact by the project team in an official public meeting did not always come from the actual "business" owners.  The number of businesses was small to begin with and likely would get significantly smaller if everyone was re-surveyed with actual questions around this specific project.

Most importantly, the questions asked were not about the specific site.  Since the site is the issue on this project whether the concerns be around parking, traffic, gentrification, or safety of children, questions and responses without that context are all but meaningless.  The Board of Commissioners should treat them that way.
Posted by Rick Short at 11:36 PM