It has been regularly in the news recently that CATS is once again studying the possibility of bringing rail transit to North Meck.  Cornelius and Huntersville recommended against the study this past summer in favor of spending the money on improvements to bus service, but predictably, Davidson went along with the new spending.  See this earlier story on that here.

CATS is paying $2.3 million for consultants from WSP (formerly Parson Brinkerhoff)  to study (again) the idea of rail transit to the Lake Norman region.  Long-time readers of aShortChronicle will remember that Parsons Brinckerhoff consultants have long been involved in studying the Red Line, raking in millions in fees with little to show for it.  Check the Red Line Chronicle for all that detail.

As part of this study the consultants put up an online survey that ended sometime last week.  aShortChronicle took the survey and screen captured the below results asof November 19th, shortly before it went offline.  What's funny is the results seem to indicate a significant amount of inconsistency in what respondents want out if a North Mecklenburg mass transit option.  In particular the results indicate that the long planned commuter rail option may be the least effective at meeting those desired uses.

Take a look at the results. 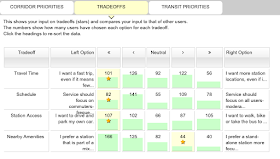 The solution to all of these points is simple, Bus Rapid Transit (BRT).

With the I77 HOT lanes expansion underway, CATS is already planning on expanding commuter bus service to the Lake Norman area.  This will be true even if the anti-toll efforts succeed and the "complete and delete" option removes the tolls.  BRT would allow for more flexible service to meet the above concerns.  It would allow for seamless no-transfer rides to Uptown and down Trade Street to the main business district just as the express buses do today - making it faster.  It would allow for multiple direct routes to Uptown and Charlotte Douglas.  Interestingly, with the type of Transit Vehicle being the lowest ranked priority that seems to burst the long-standing canard used by rail advocates that white collar workers prefer trains over buses.  In reality, this survey says that doesn't matter much.  It would also be less intrusive on the North Mecklenburg towns yo construct and significantly less expensive and faster to build.

With all that said, CATS's latest rail study - at least from the perspective of potential users - seems to say rail isn't the best option.  As this goes forward it will be interesting to see how the rail transit proponents spin this.  You can be sure they will try.
Rick Short at 6:15 AM
Share