On 9/27, aShortChronicle told readers about the planned NCDOT presentation regarding the Potts/115 and Potts-Sloan-Beaty Connector projects.  Well, that meeting happened Thursday evening at Cornelius Town Hall.

Below is a synopsis from Melissa Atherton of Davidson who attended the meeting.  Atherton also put some Facebook Live video on the Save Davidson Facebook page.  See here.

The 115/Davidson Street/Potts Intersection, Potts Street Extension to Sloan Street, and the Roundabout at Sloan Street/Griffith Street are part of an approved project funded through I-77 Toll Road Bonus Allocation funds. The funds have a time limit. All funding has to be allocated within a certain time period (needs to be confirmed) of the start of the Toll Project. NCDOT gets money and then the Town of Davidson and the Town of Cornelius put their priority projects forward. If their projects go over budget, then the towns have to pay the rest. An example is the ten-foot “Multi-Use Path” in Davidson. Clarification is needed from TOD regarding the citizen question, “Does Davidson have the funding for the path?” Jamie Justice will be consulted. Another citizen question was, “Are any federal funds involved?” This is another question for Jamie Justice.
Whose plan is this?

The plans are state-approved and funded. They were committed as part of a five-year plan.
Who is paying for the Multi-Use Path?

The Town of Davidson is paying. NCDOT does not do sidewalks.
How much will this cost?

Kimley Horn
Why does the path start in front of the Potts House, Circa 1880, a private and historic home?

According to NCDOT, there has been or will be an “Environmental Phase” that will take into consideration the plethora of historic homes and potential graveyards affected by the project. No one from NCDOT interviewed could tell citizens when or if the “Environmental Phase” occurred. The State Historical Preservation Society needs to be contacted regarding their involvement or lack of involvement.
Will houses and businesses be demolished? Who will pay for them? Will “Eminent Domain” be utilized?

Depending on the alternative plan used, both projects will demolish or impact differing numbers of homes and businesses. NCDOT will be making visits to affected homeowners and businesses (and The Green School). They will make an offer for the home or for the land they need. If the homeowner/business/school does not accept the NCDOT offer, they will use Eminent Domain.
Will the mature oak trees and crepe myrtles on Potts Street be cut down?

Yes.
What happens to the funding if I-77 Toll Lanes get cancelled?

No one could answer this question.
Was opening Church Street at the YMCA included in the Transportation Impact Analysis?

No. Assistant Town Manager Anthony Grant said this was “not on the table.” A citizen from Cornelius stated that including a connection at Church Street and the YMCA was “political suicide.”
Quotes recorded from citizens in attendance:

“The Town of Davidson has handed the Potts/Sloan/Beaty project to NCDOT.”

“The Town of Davidson has a plan in place, adopted by the board, but key tenets are being ignored by this design.”

“The only input from the Town of Davidson has been from Jamie Justice and Doug Wright, neither of whom had anything to do with the Town’s adopted plan.”

“This is the entrance to our Town. They are blowing up the idyllic, rural vernacular and landscape while replacing it with an oversized, ugly, NCDOT-Kimley Horn-urban sprawl intersection, sized for twenty years in the future. No one in Town Hall cares.”

“The reaction from the public and the apparent lack of concern from Town of Davidson staff and elected officials who attended last night was astounding.”

“This reeks of gentrification.”

“They said all plans were considered equal, but then said one is better than the other.”

“How are you going to keep the children safe with these roundabouts?”

“How will people get home to Davidson from the YMCA? There are no left turns allowed by the second alternative. People will have to go in a big circle from the Y to Cornelius and through downtown Davidson. Traffic will be terrible!”

“How will people from the West Side safely cross Potts Street to get to Town? There is no crosswalk or light shown.” 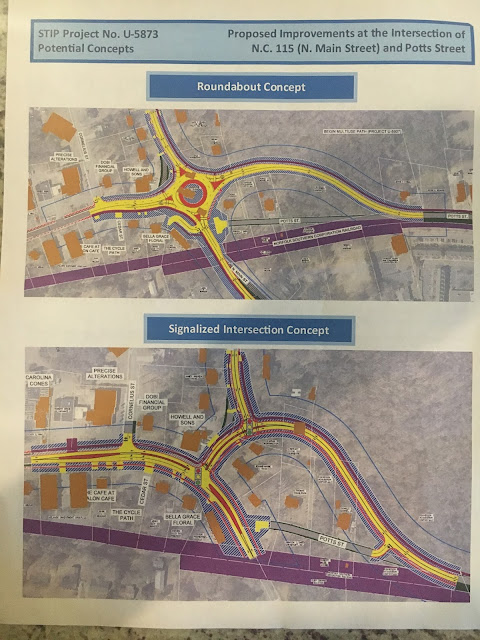 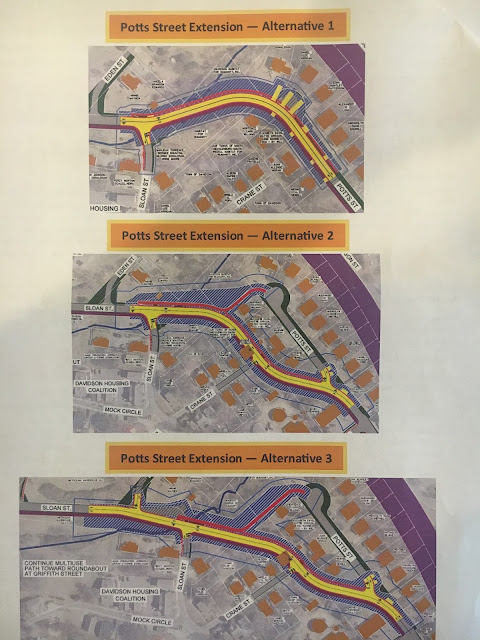