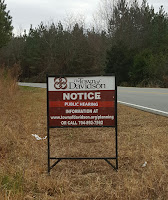 Many homeowners on Davidson's east side received what was likely an unwelcome surprise on Christmas Eve with the arrival of a letter from Town Hall.  Landing at an inopportune time considering the holidays and with many people traveling, the letters were to notify property owners that nearby land was up for rezoning.

And we're not talking about something minor.

No, this will be a massive rezoning in follow up to the recently completed Rural Area Plan.  According to the town: 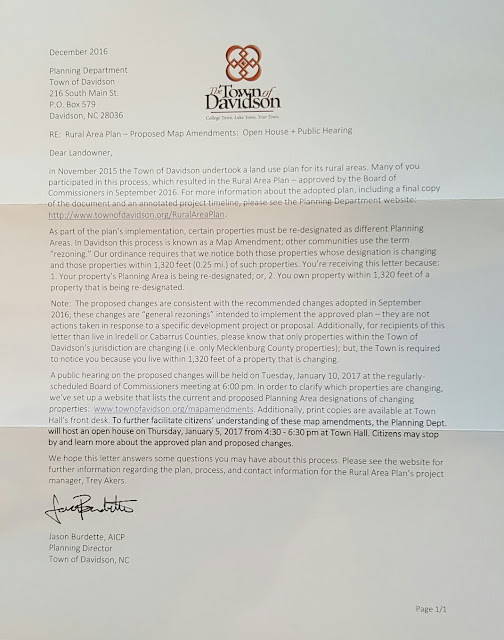 What may be surprising to many is that these rezonings being done under the auspices of the Rural Area Plan will actually make it much much easier to develop land that is currently rural.

To give you an idea of how large an impact this could be, look at the below map for some perspective.  The areas are approximate due to the use of the drawing tool on the county's Polaris site. 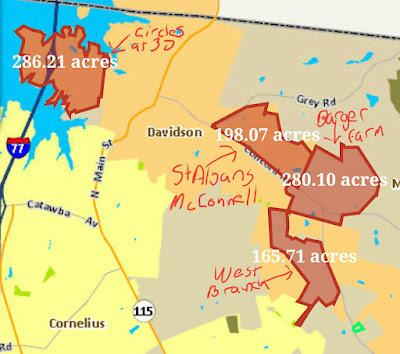 These designation changes will make dramatic new development "by right" without needing to go through rezoning at the time development is actually proposed.  Making these changes now cedes significant control from the the Town to the development community.  While it is certainly reasonable and correct for land owners to expect to do something of value with their land, the Town taking this step proactively without any proposed actual development plans makes it much easier to ram through unacceptable projects when they do come up.

As a prime example from very recent history, that is exactly what happened with the Westmoreland Farm property depicted on the map as West Branch.  One week after it was similarly rezoned when the 2015 Davidson Planning Ordinance rewrite passed, land planning efforts began in earnest for what would become West Branch. (Click link for story)

Commissioner Brian Jenest voted for the rewrite, and his firm did the land planning for the West Branch project.

If the West Branch example doesn't bother you, how about the other two areas highlighted above?  Do you think it is a good idea to have pre-approved zoning for a high density development the the size of a combined McConnell/St Albans neighborhood?  What about something the size of the entire Circles@30 area?

Now consider that this portion of the Barger Farm is just one area that will be rezoned by this Town proposal.  More than 1000 additional acres will be approved for more intense development as part of this effort as well.  Those acres will mostly be in the less dense Neighborhood Edge category, but they will still provide by right approval for an untold number of rooftops.  Neighborhood Edge requires 40% open space and does not have multifamily, but also has no density cap.

In light of all this, these rezonings should not occur until there are official projects for an area.  This would not prevent the projects from occurring, and the Rural Area Plan should be used as the guide for approving them.  However, holding off on the rezoning changes would allow the Town more control in the event a developer down the road proposes something that may be inappropriate for the area but may be "by right" under the new zoning.

Residents should plan on attending the open house this week on January 5th from 430-630pm and the official Public Hearing at the January 10th Town Board meeting at 6pm.
Posted by Rick Short at 6:00 AM