One of the first items voted on Friday afternoon at the NCGOP convention in Charlotte was an amendment adding language opposing toll roads in North Carolina to the State's GOP Platform.  Developing... 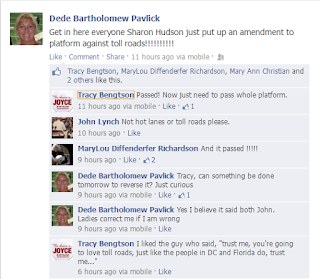 Update #1: It was not a unanimous vote. But sources tell aShortChronicle that the main opponent was revealed by Jack Brosch, candidate for NCGOP Chair, to be a highway construction consultant - sealing it for the majority.

Update #2:Reports that Ada Fisher spoke during Friday's HOT lanes NCGOP platform debate saying "we would be screwed" if we get toll roads here in NC.

Update #3:Now receiving a report that the platform discussion may have broken up due to lack of quorum, meaning the previous platform would stand unamended.

Update #4: Reports confirmed that the platform was accepted with this amendment as part of the Executive Committee meeting Sunday. However, there are also reports that an additional resolution against HOT lanes did experience issues due to a quorum. More on this story later.
Posted by Rick Short at 5:59 AM