Maybe it was an attempt to avoid another vote against plans to bring more tolls to North Carolina, or maybe it was just a sheer power play to show who's "boss", but what happened at Sunday's NCGOP Executive Committee meeting on the last afternoon of the annual State Convention certainly was not pretty.

After checking with multiple sources in the room at the meeting, it is safe to say that when it became clear the vote on a resolution opposing HOT Lanes was likely not going to go his way, Speaker Thom Tillis left the room taking enough delegates with him to break quorum and effectively shut down the meeting.

By all accounts, the move appeared intended - even coordinated - to achieve that exact result.  Two quorum calls came minutes apart.  The first achieved a result of one over quorum.  The second, mere minutes later, came immediately after the Speaker and a few others left the room.  The second call was even contested as being "dilatory".  For those not versed in the finer points of parliamentary procedure, dilatory tactics are described as "those used to delay or obstruct business, annoy the deliberative assembly, or in legislative procedure, to delay consideration of a subject for other reasons."  However, the second quorum call was allowed to proceed.  When it was finished, the meeting was, for all intents and purposes, over.

The remaining delegates were left stunned and angry at what they had just witnessed.

After the walkout, delegate Bill Green of the Forsyth County GOP spoke to those still in the room.   Referring to the Executive Committee members who left with the Speaker as "not doing their jobs" and "shirking their duties" Green's comments received applause for expressing the frustration those remaining delegates surely felt.  They had been sent to the convention to express the desires of their local party members.  They had come there to do a job.  However, the actions of Speaker Tillis and a few others prevented them from doing so.

And here's the part that makes this even more "small"...

The bulk of any perceived damage by the NCGOP formally opposing HOT lanes had already been done with the inclusion of an anti-HOT Lanes plank in the Party's Platform document.  Before quorum was broken, the platform was adopted with the amendments that had passed earlier in the convention - including one under platform Article II that said...

"We oppose any plans for or legislation in favor of HOT Lanes."

With that already in the Party Platform, the below resolution which did not receive a vote was in some ways just a formality.  However, the repercussions from deliberately subverting the actions of the Party's Executive Committee could be something that takes on a life of its own.

As has been said before here in these pages, this HOT Lanes debate has become as much about heavy-handed government and unresponsive leadership as it is about roads and transportation.  Sunday's display was a classic example.

Anti-HOT Lanes Resolution (Font reduced to fit on one page.  Click to enlarge) 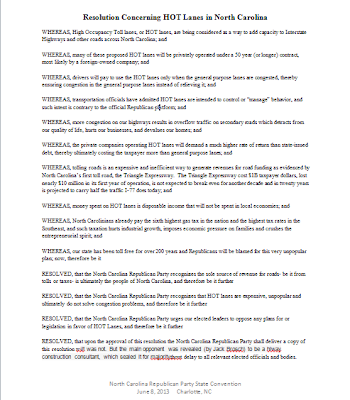 Bonus Observation: From the Charlotte Observer on the left to The Daily Haymaker on the right, this story is being reported the same way.  Not surprisingly, the Speaker's defenders are taking to places like Facebook to push back.  Over at Sharon Hudson's Facebook page there is a good back and forth on it with those who were in the room validating this account.  See post from Sunday afternoon among others. Ms Hudson was one of the activists who worked to get the resolution submitted.