Since bursting on the scene a year ago, Save Davidson has become an mainstay in the discussion on local issues in Mecklenburg County's northermost town.  The group got its start by spearheading efforts to stop the Town of Davidson from selling (cheaply) public land intended for a park to a private developer for extravagant luxury condos.  It was basically an "eminent domain" situation where the government was taking land from every Davidson citizen for the primary benefit of a private developer.

Now, there is a popular indie film out covering this exact topic, and Save Davidson is bringing it to town.  If you are involved in local activism in any way you will want to see this film.  Get your tickets now!!  The $20 ticket includes the movie and concessions as well as Q&A.  According to Save Davidson leader, Denise Beall, as of Thursday more than half of the tickets have already sold for the May 30th event at Our Town Theaters, leaving about 30 seats left.  Act now if you are interested in going.  Tickets can be purchased at the Save Davidson Store.

Join Save Davidson for a private viewing of Blockbuster indie film “Little Pink House”—a David and Goliath, Government meets minuscule but fierce citizen resistance—just released to a packed house in New London, Conn., has a show date in Davidson.

At 6:30 p.m. on May 30 at Our Town Cinemas in Davidson, Save Davidson will begin the program with a brief introduction by the leadership team and movie will begin at 7 p.m. followed by a 30 minute Q&A.  Your ticket stub gains entry and one small popcorn and one small soda.

Focusing on Susette Kelo’s ultimately losing challenge to keep her house, doomed by government’s revitalization plan for a Pfizer factory and 1,000 jobs, eminent domain and its purveyors are the bad guys.  A shy nurse, who wanted only to protect her “dream home” is the heroine.

One writer described Kelo v. City of New London (545 U.S. 469) in 2005, and its 5-4 decision, as “arguably the Supreme Court’s single most reviled decision of the 21st century.”  Forty states saw public reaction to the overpowering reach of government and enacted laws that limit “forced private-to-private property transfers.”

Any citizen, anywhere—including Davidson’s neighborhoods—may be subject to a “greater good” argument by government.  “Little Pink House” celebrates the strength of principle that propelled Suzette Kelo to fight all the way to Washington, D.C. for her finally bulldozed neighborhood.

In the ultimate irony 13 years later the proposed facility remains unbuilt and the land lies empty. 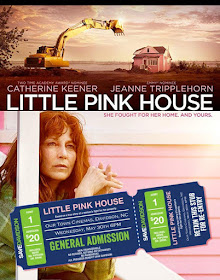