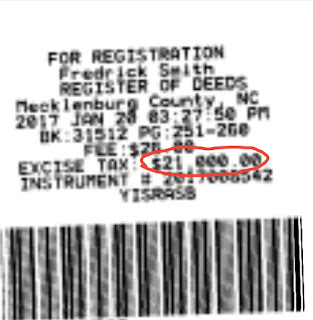 That's a HUGE number for all the land that has been under discussion as part of the Town of Davidson efforts towards implementing its Rural Area Plan (RAP).  However, the number can be reasonably implied from the tax stamp shown here.  It's the tax stamp on the deed for the old Westmoreland Farm property which is now under construction by Lennar for its West Branch neighborhood off of Davidson-Concord Road.

That's a whopper of a sum to be sure, but now let's take that $63,636 per acre and apply it to the land Davidson Commissioners and Staff want to rezone for more intense development as part of implementing the Rural Area Plan.  Under the latest plan unveiled at the February 27th work session, roughly 1100 acres will be rezoned from Rural to Neighborhood General, Neighborhood Edge, or Neighborhood Services.  That's about 150 acres less than earlier versions of the proposal.

The Westmoreland Farm property was rezoned to Neighborhood General in 2015 as part of the rewrite of the Davidson Planning Ordinance. While not all acres are created equal when it comes to development, this provides a good comparison.  Much of the land Lennar bought will remain open space as part of the West Branch project - roughly 50%.  Much of that open space is due to existing floodplain and reserved viewshed which make the land economically undevelopable.  That 50% open space is more than required for the proposed rezonings in the RAP.  Neighborhood Edge for example requires 45% open space under the proposed plan.

Eventually being the operative word in that calculation.

There is one thing the Westmoreland property had that much of the proposed rezoned land does not have at the moment - access to water and sewer.  That is critical to any large scale development. However, the town has already approved CMUD putting these extensions on their 5 year Capital Improvement Plan.

How long it might be before these are actually built is the subject for another post.  Just being on a 5 year plan doesn't ensure it takes that amount of time.  It could be longer - or shorter.

Check back later this week for more on that.