In a classic case of "watch what they do, not what they say" Lake Norman municipalities have for weeks said they have no real influence over the decision by the State to pursue widening of I-77 with High Occupancy Toll (HOT) lanes via a Public Private Partnership (P3).

As recently as Tuesday this past week Davidson Mayor John Woods told a room full of Davidson residents at a Town Community Chat...

"The community is engaged in a rather confusing and complex discussion," Davidson's Mayor John Woods said.  There has been a lot of back an forth discussion and opinions on what is right or wrong about this, but we are under the direction of the state. The town of Davidson doesn't manage I-77, nor does the City of Charlotte, Mecklenburg County or Iredell County." Huntersville Herald 1-31-13

Yet, two days later on Thursday the Lake Norman Citizen reported on meetings being organized for Monday Feb-4 between the LKN Towns and NCDOT...

The meetings are open only to elected officials and selected town staff, but similar public sessions are planned in the coming weeks.  Because only two elected officials from any one town will be present at any one time, the sessions are not subject to open meetings regulations.  The meetings were organized by mayors Lynette Rinker of Cornelius, John Woods of Davidson, Jill Swain of Huntersville and Miles Atkins of Mooresville. - LakeNormanCitizen.com 1-31-13 breaking news

Also, this isn't the first time Davdison Mayor Woods has exerted municipal influence in support of HOT Lanes.  Back in 2010 when the project was in its infancy Mayor Woods submitted this letter in support of the HOT lane concept on behalf of the Town of Davidson.

So either the municipalities have no influence or they do.  It would appear to be the latter.  Why they feel the need to exert this influence in meetings coordinated to circumvent State open meetings law is a different question. 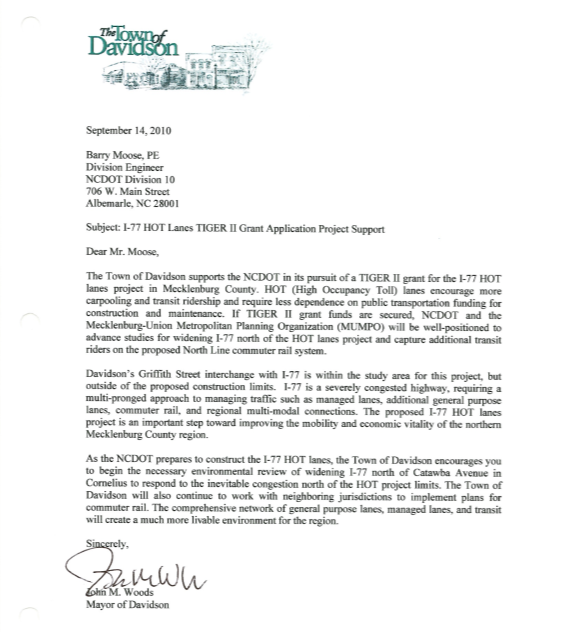 Under North Carolina law there was still no quorum for Davidson at the 1pm meeting even though half of the Board Members were there.  See here from the UNC School of Government for more details on that.  Comm Brian Jenest did not attend, but as the former Chair of the LNTC he likely knows the State position well.

MUMPO Presentation from January 18th meeting on I-77 project.  Unconfirmed report that Jim Ray of RayStrategies would be at today's meeting.  Mr Ray is mentioned on Slide 2.

UPDATE #2: Another unconfirmed report that Parsons Brinckerhoff gave a pro-P3 presentation at Monday's meetings as well.  PB is also the leading consulting company on the Red Line P3 proposal.
Posted by Rick Short at 3:30 AM