The Expected Response to Unspeakable Tragedy

As the father to small children, the thoughts of what happened in Newtown are too horrible to contemplate.  The thought that it can happen anywhere shatters one's sense of security.  When you live in a town like Davidson which sounds so similar to Newtown, it hits particularly close to home.  What those families and that community are going through is unthinkable.

Then the emails started.  That's something I wish we as a nation could have avoided.

First, I received a copy of a speech by Darrell Scott given before Congress in 1999. Mr Scott is a parent of one of the Columbine victims.  He has a second child who is a survivor  His speech went viral when it was originally given, and it has done so again in the wake of the Sandy Hook tragedy.  The gist of the email is that guns and the NRA are not to blame for these horrible events. 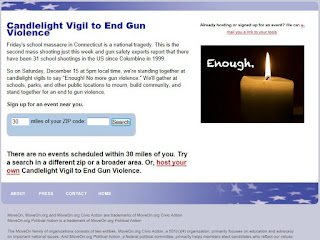 Later on Saturday came MoveOn.org with its national push for vigils to End Gun Violence.  Lori Haas, a leading anti-gun activist whose daughter survived the Virginia Tech attack called for the vigils around the country.

Then came the expected hoax email.  This one from "Morgan Freeman" blaming the media for creating the monsters who commit these crimes by giving them too much attention.  Yes, it was a hoax, but the media response in some quarters was not.  Before being revealed as not Morgan Freeman's words the email elicited some defensive responses.

All of those emails raise points that have some merit.  All of those points will get their hearing in the near future.

I just wish those emails could have waited a few days.
Posted by Rick Short at 11:31 PM