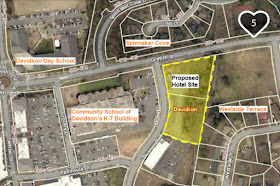 After months of waiting the NC court of appeals posted it's opinion on the Griffith Street Hotel lawsuit Tuesday morning.

In a unanimous decision, the Court decided for the Plaintiffs that the rezoning allowing the Griffith Street Hotel was invalid!

"Because the pleadings show that the Town of Davidson failed to post notice of a public input session in conformity with its own planning ordinance, the trial court did not err in granting Plaintiffs judgment on the pleadings and declaring the rezoning void ab initio."

As reported previously, the Appeal was heard back in February by a three Judge panel including Judge Lucy Inman, Judge Allegra Collins, and Judge Chris Dillon.  Judge Collins wrote the opinion with Judge Inman concurring.  Judge Dillon wrote a separate concurrence that was even stronger than the main one. The main opinion upheld the ruling based on the signage not meeting the DPO requirements.  In the second opinion by Judge Dillon, he added that the order of the procedural steps with the Planning Board meeting being prior to the hearing was mandatory as well.

While this is certainly good news for the Plaintiffs fighting the hotel project, it is not quite over.  The Defendants could file a letter asking the NC Supreme Court to take up the case.  If the Court denies this request, or if a request doesn't happen, then the main part of the case would effectively be over.

To read the whole opinion, click here.  It is the first opinion under the "unpublished" opinion section of Tuesday's opinions.  According to the understanding here at aShortChronicle, the "unpublished" just means this opinion won't be part of the legal register of NC law.  That's likely because this decision did not break any new legal ground.