New Exit 30 hotel proposal before Board of Adjustment on Monday

As speculated previously, the public hearing signs on the corner of Peninsula/Gateway Drives are for a new hotel project. Per the Town Planning department, the documentation was put up last week.  However, it was put up under the Board of Adjustment page rather than the Development Projects page because the project is seeking a variance for parking.

The documentation can be found here after scrolling to the bottom of the page. 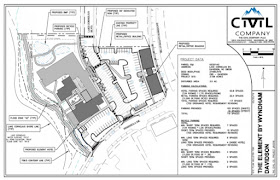 The highlights of the project are as follows:
The developer is seeking a parking variance to reduce parking to 119 parking spots, versus the 217 Davidson's ordinance would require.  This is similar to the variance granted the controversial Griffith Street Hotel.  However, there are some factors to this Wyndham proposal that should make this aspect less of an issue.
Will everyone be happy with this proposal?  Maybe not, but overall it seems to be a better plan in a better location - a plan much more worthy of approval than what the Town has approved previously on Griffith Street.

The Board of Adjustment hearing is this coming Monday, May 20th, after the regular Planning Board meeting which starts at 6pm in the Board Room at Davidson Town Hall.
Rick Short at 6:18 AM
Share