Since the beginning of the debate on the proposed new Hyatt Place next to the Community School of Davidson, the developer/landowner position has been essentially this.

If this hotel proposal is not approved, a previously approved plan is waiting in the wings for two office buildings and you really won't like that one.

That 2-building proposal was last approved/modified back in 2013 as part of the Woodies approval.  It was used to present what Commissioner Jim Fuller called a Hobson's Choice during the initial public input session in 2016.  It has been used to impact the Town's required TIA by being included as a valid alternative.

But, is it a valid thing to be used as a comparison?  What if this cudgel is just a figment of legal imagination?  What if the "previously approved" alternative didn't exist, and this hotel proposal had to stand on its own?

The position that the so called previously approved two building alternative exists rests on something called "common law vested rights".  Vested rights allow a developer to build an approved plan for a period of time after approval regardless if zoning or rules change after that approval.

The issue here is that these rights are not supposed to run forever.  There are supposed to be time limits.  Also, invoking these rights requires the developer meet several requirements showing they have good faith intent of developing the approved plan.

When this hotel project first surfaced in 2016, aShortChronical questioned the Town Attorney, Cindy Reid, on the subject of vested rights via a series of emails.  Reid issued an opinion invoking the "common law vested rights" justification, providing that response to the Board in a written opinion in late October of last year.

At the time, aShortChronical pressed Reid and the Board on one particular criteria of invoking these rights.  That involved a criteria surrounding substantial expenditure.  Here is what the UNC School of Government has to say about expenditures needed to invoke common law vested rights.

This portion of the legal requirements appears to have not been met because the property where these two buildings were originally approved has remained an unimproved parking lot. When pressed on the justification for an expense that met the above requirements the Town Attorney responded in a November 3rd 2016 email "The letter is my opinion. Please contact the developer or the developer’s attorney if you have questions about work that was or was not done."


Contact the developer for a legal justification why the Town should allow their development.  Ok.


(It should be noted that when aShortChronicle forwarded this information to Commissioners, Stacey Anderson replied on November 6th in agreement with the Town Attorney's suggestion that aShortChronicle should just ask the developer.)

So, why bring this up now many months later?

Multiple revelations have occurred recently that warrant taking another look at this.

1.  The issue is a complicated real-estate situation involving conditional zoning and numerous changes over many years, and Town Attorney Cindy Reid is not a real estate law expert.  This is proven by the fact that the Town has continued to enlist former Town Attorney Rick Kline to handle real estate issues when they come up.  Mr Kline is a real estate attorney.   His continued involvement in Town affairs was revealed in this post.  Mr Kline does not appear to have been extensively involved in writing the opinion pulled together by current Town Attorney Cindy Reid as the invoices during that time period do not show him billing the Town for anything surrounding this.  All of this raises the question, is the current Town Attorney really qualified to write the opinion the Town Board is using as a base for some of its decisions?

2.  Recently, former Town Commissioner Sandy Carnegie posted a lengthy amount of information to Facebook and also provided it to the Town.  It covered several projects involving real estate (Potts Street, Beaty Street, and the Griffith Street Hotel.)  Sandy Carnegie has been practicing real estate law for 40 years.  On the Griffith Street Hotel, he was asked the below question with his response. 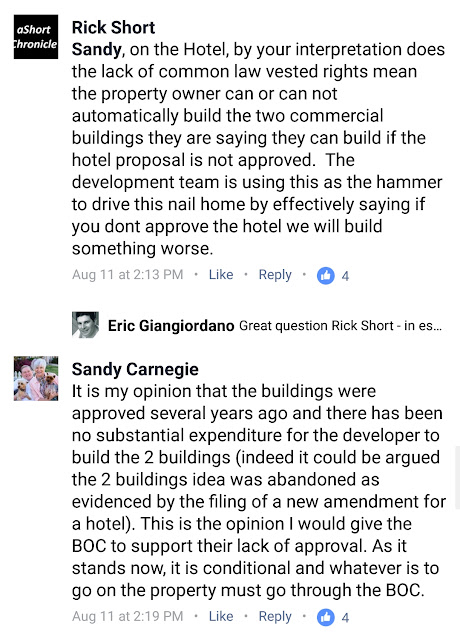 This answer corresponds to the exact concerns raised to the Town Attorney and the Board last year, the concerns where aShortChronicle was told to go ask the developer.  Certainly, two different attorneys can look at the same thing and come to different opinions.  However, it would seem prudent to go with the opinion of the attorney who has significant experience in the area of law involved in the question.

3.  The recent appraisal of the Beaty Street property released by Save Davidson shows the value of getting an expert second opinion.  In the case of the Griffith Street hotel the Town and the public could certainly benefit from a second opinion on the issue of vested rights for the hotel property.  Furthermore, in this case that second opinion can't come from former Town Attorney Rick Kline even though he is a real estate expert.  Here's why.

In the same records request used to write the piece in point #1, there are multiple emails showing Cindy Reid at least consulted Mr Kline on the Davidson Commons East/Hotel subject prior to drafting her opinion even though he did not apparently bill the town for these consultations. Secondly, there is an email thread in late May of this year from Mr Kline to town staff stating that he has been enlisted to help another developer on a separate project with the same land owner as the property for the hotel project.  Not only would using Mr Kline not provide a true second opinion on the hotel project because there is no way of knowing how much advice he did or did not give in writing the first opinion, but it is very hard to say that such an opinion involving Mr Kline now would be completely unbiased as he has been recently engaged in private business with some of the same parties on land in the same area involving the proposed hotel.

Before the Town Board votes on this request an outside attorney should take a further look at this issue of vested rights.  Commissioners should not be able to hide behind them when voting to put a hotel next to a school if those vested rights do not exist.

Bonus Observation: Check out this video of Monday's Planning Board meeting.  The topic of the vested rights and the information provided to the town by former commissioner Sandy Carnegie is near the beginning.
Posted by Rick Short at 10:46 PM