Back on October 3rd, developers held the required Public Information Session for the proposed new Hyatt Place hotel at the corner of Griffith Street and Gateway Drive - right across the street from the Community School of Davidson K-7 school building.

aShortChronicle recently obtained the feedback cards from that meeting and other information as part of a public records request.  The tally was not surprising - the large majority of feedback does not like the proposal.

After taking the raw response cards and removing a couple of duplicate responders, there were 48 distinct responders included in the file received from Town Hall.. Here's how it broke down for and against the hotel.

It should also be noted the counts identified by the developer team in the public record request shows the same number of "No" votes (20) and actually one less "Yes" vote (13).  However, the qualifications around those yes votes were not broken out.  This is pointed out here to show aShortChronicle's analysis is not trying to negatively skew the results.

At the meeting, developers presented two choices, the hotel or the current approved plan of two mixed use buildings.  The "Unqualified No" responses were people who chose the mixed use option.  There were several qualified "Yes" responses for the hotel use on the site. Those respondents raised objections to the proposed height of 6 stories and or to the possible congestion/parking issues the project will cause at this location.  It is relevant to know that most of the yes votes are highly qualified in some manner.  If the serious questions about building height and parking/traffic are not addressed, this would likely be an issue for these people.

You'll also notice a significant number of Neither/Don't Know responses.  Some of these comments spoke to the dirth of actual information presented at what was supposed to be a Public Information Session.  For example, many of the concerns related to parking and traffic could have been addressed by a Traffic Impact Analysis, but according to the public record, it wasn't decided to require one from the project until just days before the PIS.  The TIA now likely won't be done until sometime late January - long after it would have been useful for this PIS meeting.

The way the two choices were presented at the Public Information Session has also come under fire.

Multiple commenters called the presentation "unethical" and a "bait and switch".  Also, at the October Chat at the Egg where the hotel was the hot topic of conversation, Commissioner Fuller said "this was the most classic example of a Hobson's Choice I think I've ever seen" when the two choices came up in the discussion.  A "Hobson's Choice" is effectively a choice of "take it or leave it" which is not much of a choice at all.


The first thing to notice about these two pictures is this.  The hotel as originally proposed will be 6 stories and the approved mixed use option is only 3 stories.  However, when you look at the two pictures both options appear to be the same height.  Also, in the feedback one commenter asked to see a picture with the hotel and CSD in the same frame.  That was not presented at the PIS.  However, via a public records request, aShortChronicle came across just such a picture. 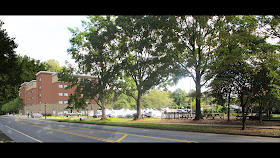 You will see a hotel building on the left of the picture and the CSD playground on the right.  The front door to CSD is behind the trees in the back of the right side of the picture. When asked why this photo was not part of the PIS, the developer's attorney, Susan Irvin, had this to say.

"We did not use this picture in the PIS because this is not the correct picture.  This was an initial sketch because the Town's ordinance does require buildings to address the street, but it was not ultimately submitted.   In the course of preparing the application, Nish (Nish Patel is the hotel developer) spent a good deal of time trying to design a plan to satisfy that requirement while at the same time preserving the existing mature trees and ultimately came up with the plan we submitted.  Staff has agreed that the plan submitted does satisfy the requirement."

So, the first Photoshopped picture above showing the mature trees remaining is correct as far as the building orientation is concerned.  The second Photoshopped picture showing the hotel's proximity to the school could have been used and just replaced the hotel picture while leaving the mature trees, but it wasn't.  This picture better shows how close the hotel will be to the school regardless of the hotel building's orientation to the street.

Based on all of this, the developers and Town Hall itself have a lot of work to do to convince people this hotel is an acceptable idea for this location.